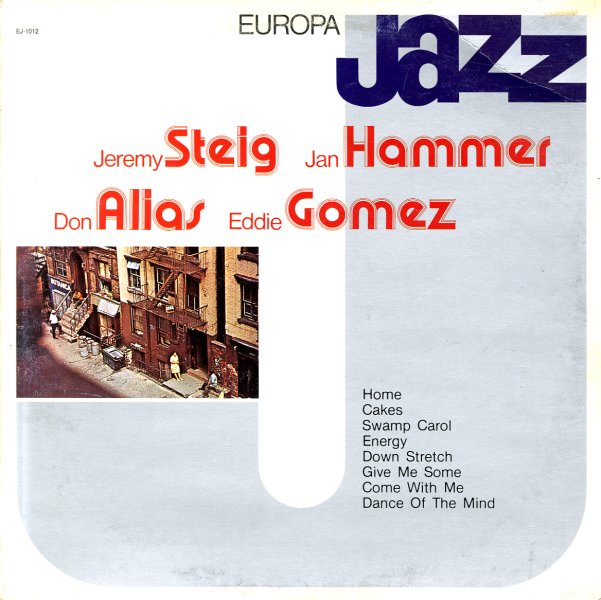 Italian reissue of Jeremy Steig's funky Capitol LP Energy from the early 70's. The record takes up where Jeremy's LPs on Solid State left off – adding Steig's hard-blowing flute to some groundbreaking beat-heavy backings by Gene Perla and Eddie Gomez on bass, Don Alias on drums, and Jan Hammer on electric piano. The sound is super-dope – and the cuts feel like they fell off some lost blacksploitation soundtrack from the early 70s. All titles are great, and the record's a completely unified, fiercely funky set that should be in the collection of any fan of funky electric jazz. Titles include "Down Stretch", "Swamp Carol", "Home", "Cakes", and "Come With Me".  © 1996-2021, Dusty Groove, Inc.
(Early 80s issue.)

Monium
Columbia, 1974. Near Mint-
LP...$18.99
Funky fusion from Jeremy Steig – still sounding pretty darn great here, although a bit freer than on some of his earlier albums. The great Eddie Gomez is still working with Jeremy here – which is one of the reasons the record sounds so great, as Eddie's bass work is deep and soulful, ... LP, Vinyl record album

Faces In Reflection
MPS, 1974. Very Good
LP...$8.99 (LP...$21.99)
Killer keyboards from the legendary George Duke – and one of his most righteous albums for the MPS label! The album's a spectacular set that showcases both sides of Duke's genius at the time – his spacey, soulful approach to a laidback tune – and his more jamming styles on the ... LP, Vinyl record album