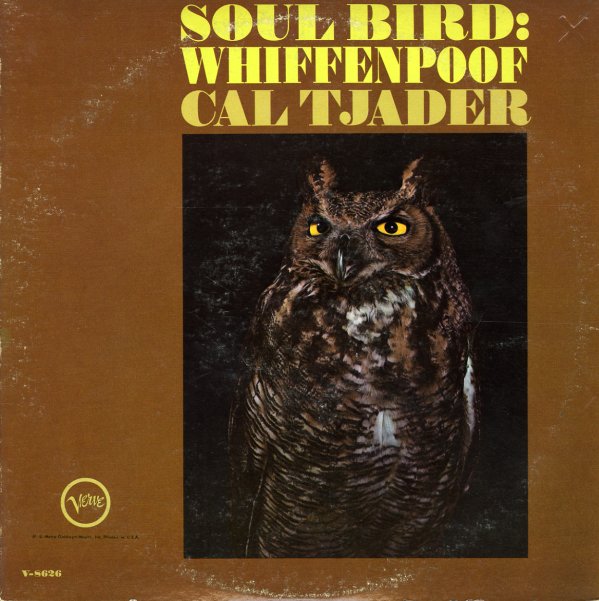 A real classic by Cal – one of the trademark albums of his time at Verve, and a unique blend of jazz, Latin, and other groovy influences! The tunes have that lightly jazzy approach that made Cal a hit with the radio and jukebox crowds at the time – a bossa-influenced mix of vibes, piano, and percussion – dancing easily over some very lively rhythms. Cal's group on the set features pianist Paul Griffin and percussionist Armando Peraza – both of whom bring a nice soulful finish to the album, helping it live past the "Whiffenpoof" in the title! Tracks include "The Prophet" – one of Cal's classics – plus "Soul Motion", "Reza", "Doxy", and "Daddy Wong Legs". Very groovy, very vibesy, and very very Verve.  © 1996-2021, Dusty Groove, Inc.
(MGM pressing with Van Gelder stamp. Cover has a name in marker and light wear.)

Best Of Cal Tjader
Verve, Mid 60s. Near Mint- Gatefold
LP...$14.99
Cal cut so many great sides for Verve during the 60s, it's hard to imagine how anyone could come up with a "best of" – but this album fits the bill nicely, and includes a number of solid groover and Latin jazz tracks that fit just right! Includes "Sake & Greens", ... LP, Vinyl record album

California Dreaming
Verve, 1966. Very Good+ Gatefold
LP...$19.99
A stone classic on Verve! Back in the 60s, Wes Montgomery must have been California Dreaming – because by the time of this LP, he'd come a long way from his Indiana roots – and had used the best part of the hip west coast scene to add a lot to his style – fuller rhythms and ... LP, Vinyl record album

Four For All
Verve/Polygram, 1987. Near Mint-
LP...$14.99
With Charlie Rouse on tenor, Kenny Barron on piano, Ben Riley on drums, and Buster Williams on bass – on titles that include "Baiana", "Bittersweet", "Lunacy", and "Lupe". LP, Vinyl record album

Modern Clarinets – Buddy DeFranco With Strings/Modern Jazz
MGM/Verve (Japan), Early 50s. Near Mint-
LP...$19.99
A very cool Japanese-only album – one that brings together two rare 10" releases by these modern jazz giants of the clarinet! Side one features Buddy DeFranco with some larger backings, but a core group that also features Kenny Drew on piano, Art Blakey on drums, and Sabu Martinez on ... LP, Vinyl record album