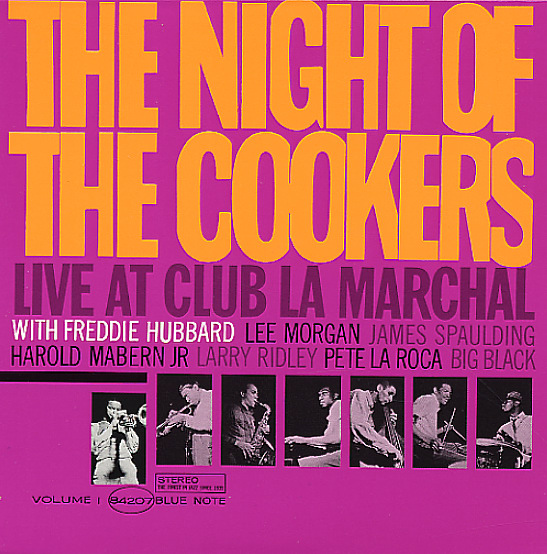 Night Of The Cookers Vol 1

Also available
Freddie Hubbard — Night Of The Cookers Volumes 1 & 2 ... CD 14.99
A landmark set for Blue Note – one that features Freddie Hubbard working in raw, firey, freewheeling territory – given space that few other players at the label were getting at the time! The two volume set features tracks recorded live at Club La Marchal in Brooklyn – and have Hubbard working with a completely hip group that features Lee Morgan, James Spaulding, Harold Mabern, Larry Ridley, Pete La Roca, and Big Black on conga. Each side of the album features one long track – and this first volume features the tunes "Pensativa" and "Walkin" – done in an extended style that's much rougher and rawer than Hubbard's studio albums of the time!  © 1996-2023, Dusty Groove, Inc.
(Liberty stereo pressing, with Van Gelder stamp. Cover has some light wear, and a small bump in one corner – plus a small stain on back. Vinyl is nice.)

Super Blue
Columbia, 1978. Very Good
LP...$1.99 (CD...$19.99)
A sweet late 70s set from Freddie Hubbard – a slight move away from some of his highly-electric sides of the CTI years, yet one that still has some of the most soulful qualities of that work! Freddie's trumpet has a nicely spacious quality throughout – one that's flowing, and almost ... LP, Vinyl record album