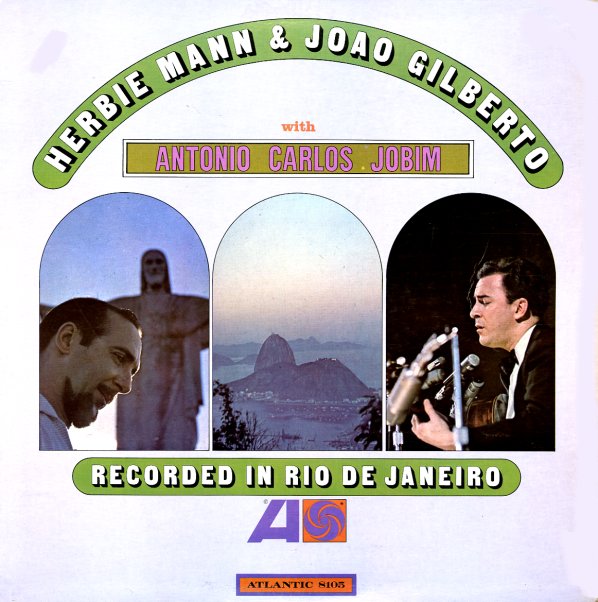 A great little record, and one that might be thought of best as a "Herbie Mann Plus" record – rather than a duet between the artists on the cover! Half the set features the American release of some great Joao Gilberto material from the early years in Brazil, with arrangements from Antonio Carlos Jobim – and the other half features excellent alto and flute solos from Mann, set to some sweet bossa backings by Jobim – with some additional guitar from a young Baden Powell! Given the Jobim arrangements on both sets of material, there's a great unified feel to the whole thing – and Herbie cuts include "Amor Em Paz", "Insensatez", "Consolacao", "Deve Ser Amor", and "One Note Samba" – which has a vocal by Jobim. Gilberto cuts include "Rosa Morena", "Samba Da Minha Terra", "Bim Bom", and "Desafinado".  © 1996-2023, Dusty Groove, Inc.
(Momo red & purple label pressing. Cover has light wear and aging, and a partially split top seam.)

Encontros E Despedidas
Barclay (Brazil), 1985. Very Good
LP...$4.99
A nicely understated 80s set from Milton Nascimento – a record that still has that heavenly, soaring sensibility in his vocals – but which maybe also has some of the intimacy you might expect from the cover's image of Milton walking alone in a forest! There's some jazzy currents in the ... LP, Vinyl record album

Viajando Com O Som – The Lost 76 Vice Versa Studio Sessions
Far Out (UK), 1976. Near Mint-
LP...$24.99 (LP...$26.99)
A never-issued album by the great Hermeto Pascoal – recorded in the space between his 70s classics Slaves Mass and A Musica Livre – and every bit as amazing as those classics! The music here is fluid, open, and a fantastic mix of jazz and all of Hermeto's new ideas about musical ... LP, Vinyl record album