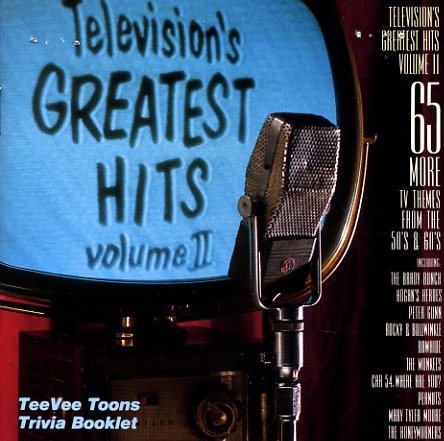 Television's Greatest Hits Vol 1 – 65 TV Themes! – From The 50's & 60's
TV Tunes, 1985. Near Mint- 2LP Gatefold
LP...$14.99
The classic first volume in this series, put together back in the 80's, when loads of hip hop tracks were sampling things like "Inspector Gadget" and "Batman". Still classic now, though, and with loads of material, like The Flintsones, Batman, Lost In Space, Star Trek, The Dick ... LP, Vinyl record album

Rendez-Vous
Edipan/Sounds From The Screen (Italy), 1975. Very Good+
LP...$24.99 (LP...$29.99)
One of the most obscure 70s albums from the great Bruno Nicolai – a smaller label sound library set, but one that's served up with all the depth of his famous film scores of the time – including his famous collaborations with Ennio Morricone! The music here is great – lean and ... LP, Vinyl record album

Jaws
MCA, 1975. Very Good+
LP...$14.99
A 70s soundtrack that hardly needs an introduction – given that its music and image were virtually ubiquitous at the time! The record's best known for John Williams' famous "da-da da-da" theme for the film – used in the titles, and whenever the big guy wanted to attack – ... LP, Vinyl record album

Che!
Tetragrammaton, 1968. Very Good
LP...$4.99
A pretty cool score by Lalo Schifrin – one that's Latin, but not in the same bossa style as his other 60s albums. The film – as you can imagine – is about Che Guevara, and it stars poor Omar Sharif, who was forever pegged to play the "ethnic" star in films like this. ... LP, Vinyl record album

Music – It's Happening Now!
Capitol, Late 60s. Very Good
LP...$9.99
McCallum's third album for Capitol – and like the first, a genius batch of instrumental tunes that's graced with the talents of HB Barnum and David Axelrod! As beathead revivalists have shown, the album would be nothing without that pair, especially Axelrod – and McCallum's really just ... LP, Vinyl record album

Cal Tjader Sounds Out Burt Bacharach
Skye, 1968. Very Good+ Gatefold
LP...$39.99
Fantastic – and about as great as you'd imagine! The cool Latiny vibes of Cal Tjader meet the great compositions of Burt Bacharach, and the result is a shimmering set of tracks that forever defines the sound of groovy 60s! Cal's the perfect choice for music like this – as his sense of ... LP, Vinyl record album