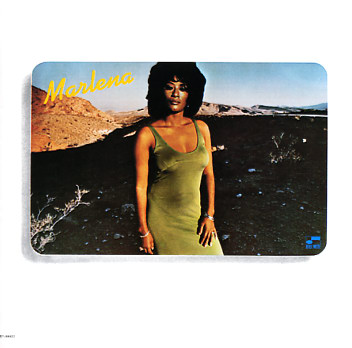 A great lost treasure, and one of Marlena Shaw's most obscure albums – a really compelling batch of sophisticated vocal tracks with arrangements by Wade Marcus! The instrumentation is wonderful – with lots of soulful guitar and organ licks amidst the larger orchestrations, giving the set a down-home feeling in the right places, usually underneath some of Marlena's more intimate vocals – and the style is a great bridge from her Cadet sound of the 60s into the more sophisticated years of the 70s. Marlena sings a lot of soundtrack and easy material – including "Somewhere", "What Are You Doing For The Rest Of Your Life", "You Must Believe In Spring", and "So Far Away" – but she mixes these cuts with good doses of soul material – like "Save the Children", "Wipe Away the Evil", and "Runnin Out of Fools" – into a killer batch of tracks that stands with the best of some of Marlena's Cadet work!  © 1996-2021, Dusty Groove, Inc.
(UA pressing. Cover has some wear and aging, with a stain and center split in the spine.)

Killer On The Rampage
Epic/Ice, 1983. Near Mint-
LP...$11.99
An unlikely contender to the throne of king of electro, this early 80s effort from Eddie Grant helps to prop him up there quite nicely. Heavy synth driven grooves bubble along nicely with that crisp Linn Drum sound, and though this album benefited from some wider pop appeal, there's more than a ... LP, Vinyl record album