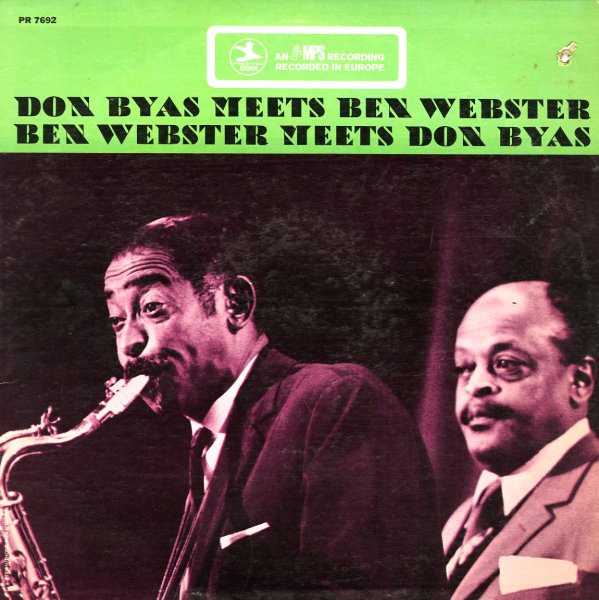 A rare meeting of these two American giants of the tenor sax – brought together at the end of the 60s in Europe, both recording late in their careers, but with a laidback and open approach that's really wonderful! The format here is quite loose – a bit like some of the late hours, swing-based sides on Prestige at the end of the 50s – with longish tracks that let both players state their solos in clean, well-recorded phrasings – with gentle support from a trio that includes Tete Montoliu on piano, Peter Trunk on bass, and Albert Tootie Heath on drums. There's a few faltering moments at times, but they also add a nice degree of humanity to the record – kind of a dimming genius that might not have been allowed on an American session by either player, but which speaks volumes here for the time and distance both players had travelled! Titles include "Caravan", "Sundae", "Blues For Dottie Mae", and "Perdido".  © 1996-2021, Dusty Groove, Inc.
(Blue label pressing from the late 60s. Cover has a cutout hole in one corner.)

Mingus Ah Um
Columbia, 1959. Very Good+
LP...$59.99 (CD...$4.99, LP...$28.99)
One of Charles Mingus' true classics – and an essential album in any jazz collection! This 1959 gem was recorded by Mingus at a key point in his career – when he was rising from the jazz underground into the ranks of America's elite jazzmen, penning some of the most challenging work of ... LP, Vinyl record album