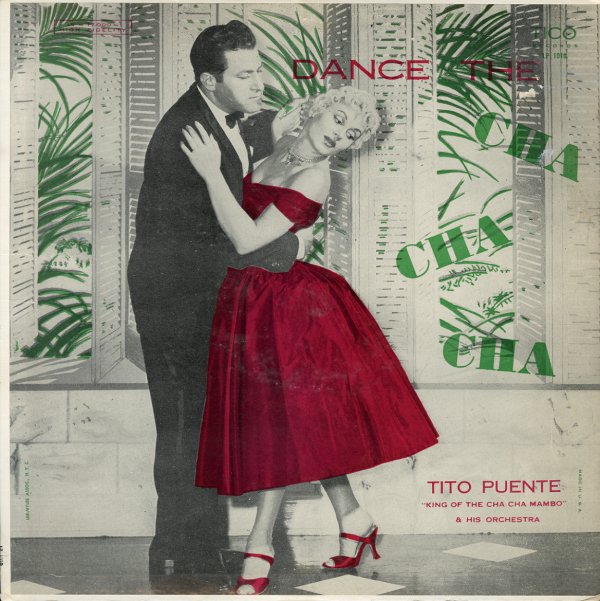 One of Tito's classic 50's recordings for Tico, all of which have a much rawer sound than his work for RCA from the same time. The tracks on here represent some Tito's best work in the Cha Cha Cha format – played with a hard sound and a good percussive drive aimed towards a very appreciative Latin audience. Titles include "Rico Vacilon", "Adele", "The Knockout", "Hot Tamales", "Oigan Mi Cha Cha Cha", and "The Man From Jamaica".  © 1996-2022, Dusty Groove, Inc.
(Original black label pressing with deep groove. Cover is nice on front, save for one small bump – and back has a small name in one corner.)

Carnaval En Harlem
Tico, 1966. Very Good
LP...$14.99
Darn nice record by Tito – and one with a soulful 60s feel, hinted at by the "en Harlem" in the title. The record's not really a Latin soul album, but it's got certain groovy 60s elements that are done very very nicely. Includes great Latin versions of "Downtown" and ... LP, Vinyl record album

Tito Puente & His Concert Orchestra
Tico, 1973. Very Good
LP...$24.99
An excellent set from Tito – very funky, unlike most of his other work from the time! The record has a great electric vibe to it – thanks to a hip bass player in the group, to Charlie Palmieri, who plays organ and electric piano on the record, and to Tito himself, who's never sounded ... LP, Vinyl record album

Let's Cha Cha With Puente
RCA, 1957. Very Good
LP...$9.99
It's easy to cha cha when Tito Puente's in the house – especially when he's working in his near-perfect RCA mode of the late 50s! The tunes are nothing fancy, but the execution is sublime – tight Latin rhythms at the bottom, done in a way that's never too bombastic – topped with ... LP, Vinyl record album

Bang! Bang! Push! Push! Push! – Wanted Dead Or Alive
Tico, 1966. Very Good+
LP...$34.99
A Latin classic from the word "bang"! This album was the one that busted Joe Cuba out of the Latin ghetto – into the sound of 60s soul, early funk, and beyond. The record's a stone winner – filled with boogaloo tracks delivered by Joe's firey young sextet, a killer ensemble ... LP, Vinyl record album

Senor Tito Rodriguez
Tico, 1958. Near Mint-
LP...$16.99
An excellent little set from Tito – recorded in the late 50s for Tico, with a groove that's harder than much of his 60s work for United Artists! The lineup includes some nice jazzy vibes work on a few tracks – and the album includes the great percussive track "Suena Tu Bongo (Beat ... LP, Vinyl record album

Our Heritage
Tico, 1976. Very Good
LP...$19.99 24.99
Flautist Lou Perez leads his band through the "Our Heritage" suite, plus a bunch of montunos and son tracks with a fairly traditional feel. The band includes Lou's flute, plus violins, Spanish guitar, cello, and piano. LP, Vinyl record album

Pete With A Latin Beat
Tico, 1960. Very Good+
LP...$43.99
Pete in a very Latin Beat – playing vibes with heavy percussion, in a style that has equal parts jazz and equal parts Latin, and which moves past the sleepier sound of some of his earlier, mellower records. Cha cha is the basic groove of the tunes, but the execution and the heavier style of ... LP, Vinyl record album

Tito Puente Swings & Vicentico Valdes Sings
Tico, 1963. Very Good+
LP...$43.99
Tito's classic early 60s group is joined by the legendary Vicentico Valdes on vocals – for a nicely swinging album that we like better than most of the mid 60s sides Valdes cut under his own name. Titles include "Soy Feliz", "Nueva Vida", "No Lo Hago Mas", and ... LP, Vinyl record album