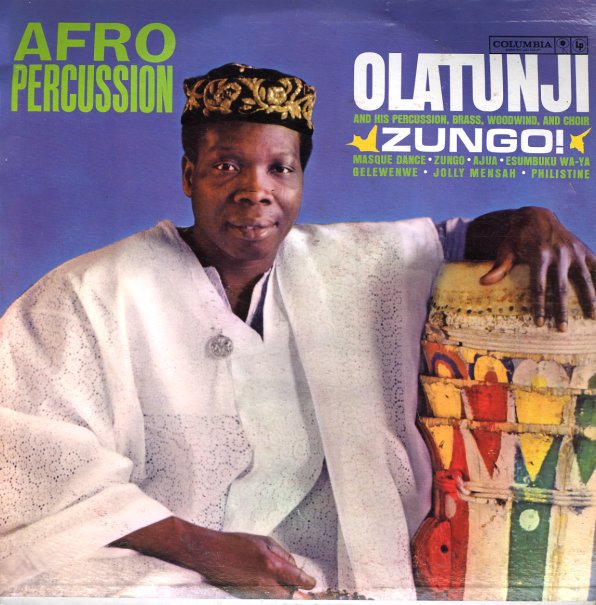 One of Olatunji's best LPs, and a record that breaks out of his usual straight hard percussion stuff by adding some jazz players like Yusef Lateef, Clark Terry, and George Duvivier. There's also some singers augmenting the ensemble, but they drop out in parts, and the percussion and jazz take over. Olatunji's joined by Ray Barretto and Montego Joe on congas, and the whole thing grooves like one of Art Blakey's jazz/percussion experiments. 7 tracks: "Masque Dance", "Zungo", "Ajua", "Esum Buku Wa-Ya", "Gelewenwe", "Jolly Mensah" and "Philistine".  © 1996-2021, Dusty Groove, Inc.
(Mono 6 eye pressing. Cover has light wear and some aging.)

More Drums Of Passion
Columbia, 1966. Very Good+
LP...$4.99
Babatunde Olatunji goes even more drum-crazy than before – working here with no less than nine percussionists, plus a host of singers as well! The tunes have a very rootsy groove throughout – instrumentation that only comes from the rhythm instruments, some of which are pointed towards ... LP, Vinyl record album