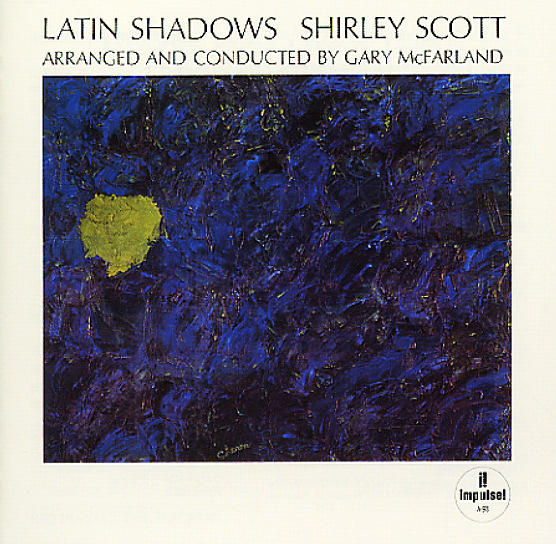 A great album from Shirley Scott – with some excellent arrangements by Gary McFarland! We've always felt that Shirley plays best when she's not leading the group – when someone else is handling the arrangements, so that she can groove mightily on her own – and this album is a perfect illustration of that fact! The album has a sparkling bossa and 60s groove finish – similar to McFarland's albums for Verve at the time – and Shirley's light touch on the Hammond really makes the whole thing dance nicely! Tracks include a sweet version of "Soul Sauce", plus covers like "Can't Get Over the Bossa Nova", "Downtown", and "Dreamsville". Also includes "Latin Shadows", a great original by McFarland!  © 1996-2021, Dusty Groove, Inc.
(Orange and black label mono pressing, with Van Gelder stamp! Cover is very nice – save for a small cutout mark, and a light name in one corner.)

Treasure Island
Impulse, 1974. Very Good+
LP...$9.99
Ultra-hip work from pianist Keith Jarrett – a session that's filled with joy and life, and which has a lot more energy than some of his albums for ECM! The work here is kind of a refinement of the freer styles that Jarrett had laid down on previous albums – performed with a strongly ... LP, Vinyl record album

Freeflight
Impulse, 1972. Very Good+ Gatefold
LP...$19.99
Brilliant work by Jamal – and one of his first albums to feature electric piano! The mode of the tracks is in that "stretching out" style he was using as the 60s came to a close – a bit inspired by McCoy Tyner, but more an exploration of the lyricism of his earlier work, set ... LP, Vinyl record album

Magic City (Impulse pressing)
Impulse, 1960/1973. Near Mint- Gatefold
LP...$59.99
One of the most important Sun Ra albums from the early years of Saturn Records – a set that got a bit more circulation than some of his other records, and which shows the group really expanding their sonic range in a wonderful way! The title track takes up all of side one – and is this ... LP, Vinyl record album

Irrepressible Impulses – Music You Don't Hear On Radio, At Least For The Time Being
Impulse, 1972. Very Good+
LP...$14.99
A classic compilation of material from the hip later years of Impulse – put together with a title that's a bit misleading, given that some of this stuff was clearly getting some play on underground FM radio! There's some key righteous classics here – like "Attica Blues" and ... LP, Vinyl record album

Additions To Further Definitions (80s pressing)
Impulse/MCA, 1966. Near Mint-
LP...$7.99
A great example of the cool, classy swing that Benny Carter hit in the 1960s – a groove that was more regularly brought to backings for standout singers of the time, but which also works beautifully here in an instrumental mode! Carter's alto sax is at the top of the charts, but the album's ... LP, Vinyl record album