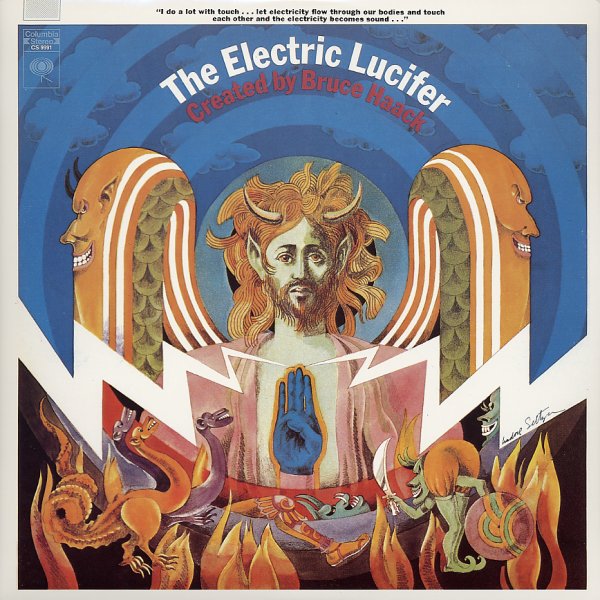 One of the greatest moog albums ever – all original sounds and tunes from the legendary Bruce Haack! Haack had spent most of the 60s doing small label kiddie records on his own, but this late 60s gem on Columbia is probably his best known work – a masterpiece of short and groovy little songs that are heavy on analogue electronics and special effects! There's a really fuzzy feel to most of the work here – heavy echo and reverb that give the album a very dark feel, even when the songs are a bit light and playful. Haack's lyrics are great too – quite conceptual, with a spiritual undercurrent that's surprisingly great – and which adds a further layer of meaning to the set! The whole thing's a bit like the Silver Apples, but more experimental – and there's a love of sound, shape, and texture that Haack never matched again on later albums. A key predecessor to Suicide, Stereolab, and countless others – with titles that include "Electric To Me Turn", "Cherubic Hymn", "Program Me", "War", "Incantation", "Angel Child", "Super Nova", "Requiem", "Song Of The Death Machine", and "National Anthem To The Moon".  © 1996-2023, Dusty Groove, Inc.

Jingle Workshop – Midcentury Musical Miniatures 1951 to 1965 (clear vinyl pressing)
Modern Harmonic, 1950s/Early 60s. New Copy 2LP Gatefold
LP...$32.99 34.99
A really cool side of work from the enigmatic Raymond Scott – the legendary midcentury figure who did a wealth of creative work in jazz, soundtrack, and electronic music fields! Turns out, Scott also recorded a heck of a lot of commercials in his studio – all in ways that embrace all ... LP, Vinyl record album

Maison Rose (with bonus 7" single)
CBS/Souffle Continu (France), 1977. New Copy (reissue)
LP...$32.99 36.99
An album of fragile beauty and buried darkness – in a space that's somewhere between the work of Nico and Brigitte Fontaine, but a fair bit sweeter overall! Emmanuelle Parrenin sings here in a timeless style that might almost be called folksy – especially in the return to tradition ... LP, Vinyl record album