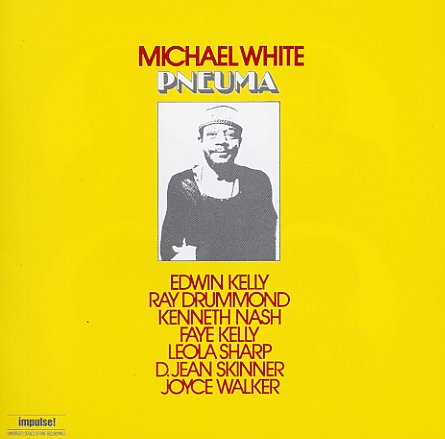 Amazing work from violinist Michael White – one of a few that he cut for the Impulse label in the early 70s, all of which helped to completely redefine the use of his instrument in jazz! Throw away any sleepy connotations you may have about the violin, because in White's hands it's an instrument of soul and spirit – one used to unlock cosmic tones that glide effortlessly next to the session's earthy blend of piano, bass, and percussion! White shapes his sounds beautifully for the session – breaking the violin free of any staid European-bound traditions – and using the instrument as a key part of the new tradition of African American expression explored by Leroy Jenkins, Billy Bang, and others. Side one features the extended "Pneuma" suite – a long, exploratory track that sounds a bit like some of Leroy Jenkins work at the time – and side two tightens things up with some shorter, groovier numbers that often also feature vocals! Our favorite is the anthemic vocal number "Journey Of The Black Star" – a skipping, joyful ode that's really great – and other tunes include soulful tracks "The Blessing Song" and "Ebony Plaza", both of which have that warm post-Shepp Impulse glow to them!  © 1996-2023, Dusty Groove, Inc.