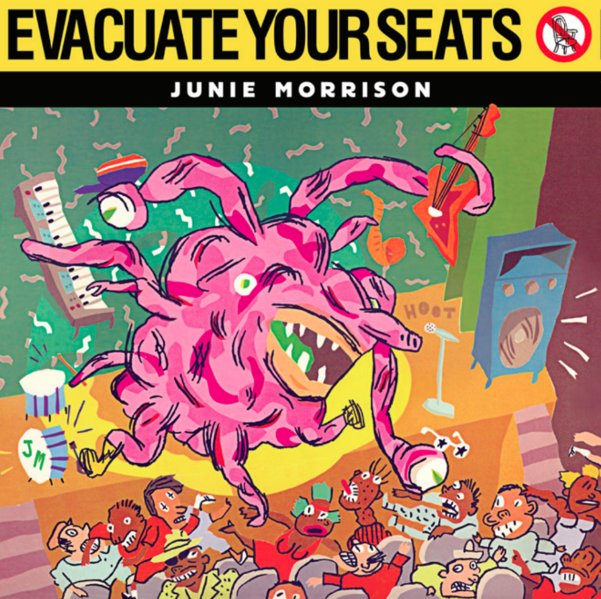 Evacuate Your Seats (with bonus tracks)

A well-circulated solo set from Junie Morrison – by now working very far from the P-Funk empire, and with a groove that fits in nicely with the sound of 80s soul! The album's heavy on basslines, beats, and keyboards – very much an 80s funk evolution from Junie's 70s roots – with the man himself serving up lead vocals that have a light vibe that's very much in an electro-ready sort of style! A few cuts have more pronounced guitar solos, but with the fuzz trimmed to slide in nicely with the more electronic elements in the mix – that compact 80s mode in which everything comes on right down on top of each other in the mix! Titlesinclude "Tease Me", "Stick It In", "Break 6", "Here With You Tonight", "Show Me Yours", "Gyrate", "Driving In A Porsche", and "Techno Freqs". CD features bonus tracks – "Tease Me (Arthur Baker long mix)", "Tease Me (Arthur Baker short)", "Tease Me (Arthur Baker dub)", "Techno Freqs (UK single)", "Techo Freqs (12" rmx)", and "T-Frequan (dub)".  © 1996-2023, Dusty Groove, Inc.

Do It (Til You're Satisfied) (with bonus tracks)
Scepter/Iconoclassic, 1974. New Copy
CD...$11.99 15.99 (LP...$7.99)
The monumental debut of BT Express – and an excellent funk album that often gets overlooked by fans of the music because of the band's bigger fame as a disco group! This first record has the combo grooving hard and instrumentally – in the mode of a tight blacksploitation soundtrack, ... CD

Broadway's Closer Than Sunset (with bonus track)
Iconoclassic/CBS, 1984. New Copy
CD...$10.99 11.98
The first breakaway effort from the trio of Ernie Isley, Chris Jasper, and Marvin Isley – a set that's got an even leaner groove than some of the Isley Brothers material from years before! The group really hit their stride right away – stepping out in a sweet array of funky rhythms ... CD

One For The Soul (with bonus tracks)
Ze/Light In The Attic, 1985. New Copy
CD...$3.99 15.98 (LP...$6.99)
The amazing Lizzy Mercier Descloux adds one more global feather to her cap with this sweet little album – a set recorded in Rio, with help from a host of Brazilian musicians – and some special guest work from legendary trumpeter Chet Baker too! The record warms up the sound a bit from ... CD