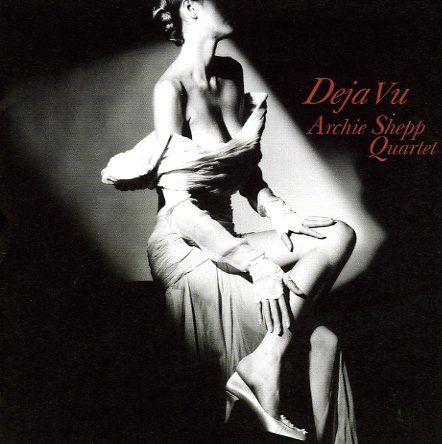 Beautiful ballads from Archie Shepp – one of his later dates for Venus Records, recorded with a soulful, subtle sound that's totally great! The Shepp heard here is hardly the freewheeling player of 60s avant years – and is instead an aging master of the tenor who manages to draw on years of experience, and bring them into play with simple touches that are totally great! Most tunes here are taken at a relaxed pace – with rhythm from Harold Mabern on piano, George Mraz on bass, and Billy Drummond on drums – but Shepp blows with this offbeat sensibility that's really wonderful, a bit like some of the understated genius Coleman Hawkins brought to records like this during his own later years. The album's drenched in soul, and recorded with really beautiful sound – and titles include "What Are You Doing The Rest Of Your Life", "Deja Vu", "April In Paris", "Sous Le Ciel De Paris", and "L'Ame Des Poetes".  © 1996-2023, Dusty Groove, Inc.
(2009 Japanese pressing with obi!)

Way Ahead
Impulse/MCA, 1968. Used
CD...$11.99
Definitely the way ahead in jazz – back in the 60s, and well into the 21st Century too! Archie Shepp's in prime form here – working with a sextet that's awash in avant freedoms, but which always shows a great sense of restraint – just the right power gained from the new modes of ... CD

Things Have Got To Change – Live At The Totem Vol 1
Marge (France), 1979. Used
CD...$18.99
A fierce and full-on session from Archie Shepp – a real return to avant jamming, in a style that recalls his best French work of the late 60s, but which also has some of the soulful touches of his late 70s years! The group features Sigfried Kessler on piano, Clifford Jarvis on drums, and ... CD

Soul Song
Enja (Germany), 1982. Used
CD...$11.99 (CD...$13.99)
An overlooked treasure from Archie Shepp – a set recorded for the Enja label with a profile that's not as bold as some of his other albums, but a great later session that has some surprisingly wonderful moments! Perhaps the best of these is the album's long workout on "Mama Rose" ... CD

Waltz Blue Side
Venus (Japan), 2002. Used
CD...$14.99
They had us at "waltz" with this one – because the combination of Steve Kuhn's inherent groove and the loping rhythms of the style always fit beautifully together – kind of a subtle return to the modal elements that first made Kuhn's music so wonderful back in the 60s and 70s! ... CD

Again (Japanese paper sleeve edition)
Venus (Japan), 1998. Used Gatefold
CD...$24.99
The rhythms here are great – Ray Drummond on bass and Ben Riley on drums – a pair who bring a slightly different flavor to a trio date from pianist Eddie Higgins – a subtle groove that we really like a lot! Eddie's later lyrical keys are in perfect form here – and Riley's ... CD

Love Walked In (Japanese pressing)
Venus (Japan), 1998. Used
CD...$11.99 18.99
There's plenty of love in the tones of Steve Kuhn's piano here – that deeply expressive sound that we first came to love in his earliest years, matured beautifully in the subtle setting of a straight trio date like this – with help from Buster Williams on bass and Bill Stewart on drums! ... CD

Killer Joe
Venus (Japan), 2005. Used
CD...$11.99
Pure genius from a great lineup – an assortment of players who've made quite a name recording sets like this one for the Japanese market! Tenorist Eric Alexander is very firmly in place on the set – giving it the same gentle soul and well-crafted sound as his own great albums – ... CD