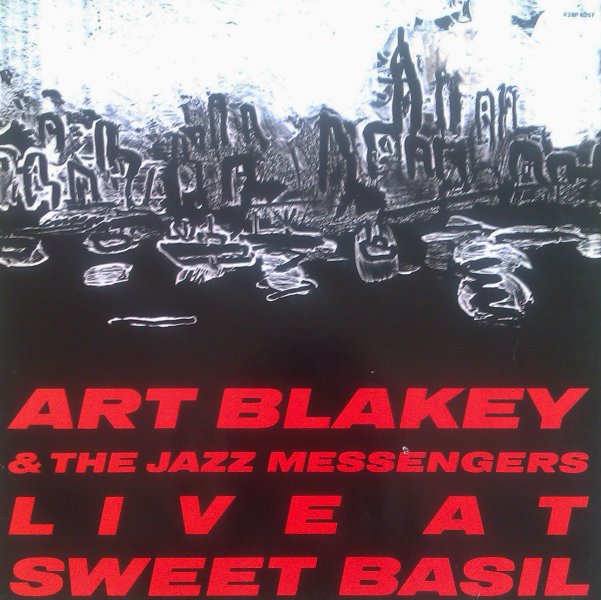 Also available
Art Blakey — Live At Sweet Basil ... CD 18.99
The Jazz Messengers spirit is alive and well on this crackling session from the 80s – a great live date that's features lots of tremendous work on drums from the great Art Blakey, in a stunning sextet of younger players with Terence Blanchard on trumpet, Donald Harrison on alto, Jean Toussaint on tenor, Lonnie Plaxico on bass, and Mulgrew Miller on piano! All these names have risen to great fame as leaders on their own, but they really seem to hit something special here in the company of Blakey – this strongly focused sense of energy that has the group coming across with a great deal of power, before each of the members serve up some tremendous solos on their own! Tunes fresh readings of Messenger classics "Blues March" and "Moanin", both with a very individual vibe, given the soloists – plus the tracks "Jodi" and "Mr Babe".  © 1996-2023, Dusty Groove, Inc.
(Out of print, includes obi.)

In This Korner (with bonus track)
Concord, 1978. Used
CD...$4.99 9.99
Art Blakey at the Keystone Korner – really rattling the rafters with a great lineup that includes Bobby Watson on alto sax, David Schnitter on tenor, and Valery Ponomarev on trumpet! Although the Shorter/Morgan lineup is always hailed as one of Blakey's best, we're also pretty partial to ... CD

Buhaina's Delight (RVG edition)
Blue Note, 1961. Used
CD...$11.99 (LP...$25.99)
A landmark recording by a whole new chapter in Art Blakey's career! During the early 60s, Blakey expanded the Jazz Messengers from a quintet to an incredibly tight sextet – adding in the trombone of Curtis Fuller for an extra-punched up frontline that also included Freddie Hubbard on trumpet ... CD

Big Beat
Blue Note, 1960. Used
CD...$8.99
One of the greatest Art Blakey Blue Note sessions of all time – and perhaps one of the greatest to realize the genius of the Jazz Messengers lineup that included Lee Morgan on trumpet, Wayne Shorter on tenor, and Bobby Timmons on piano! The trio of young talents are at the height of their ... CD