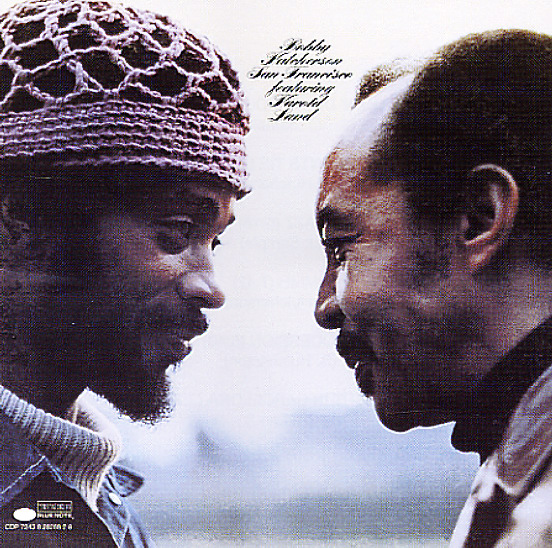 Also available
Bobby Hutcherson — San Francisco ... CD 34.99
Genius, pure genius! This album's possibly the most perfectly realized set from the team of Bobby Hutcherson on vibes and Harold Land on reeds – a pair who hit territory that's slightly funky, but which is also still touched by the modal spiritualism of some of their earlier work together! The album has an approach that we've not heard on other sides from the time – in that it takes its time to build the grooves up slowly, layering element over element as the songs unfurl, crafting some killer numbers that make the album incredibly strong as a whole. Land plays flute and tenor, and even a bit of oboe, which makes for a wonderfully compelling reed sound – and the group also features Joe Sample on Fender Rhodes, on loan from The Crusaders, plus Fender bass from John Williams and drums from Mickey Roker. Titles include the classics "Ummh" and "Goin' Down South", which have been made famous over the years, thanks to the magic of sampling technology – plus the tracks "Jazz", "Night In Barcelona", and "Procession".  © 1996-2023, Dusty Groove, Inc.
(Part of the Blue Note Classic Vinyl Series!)