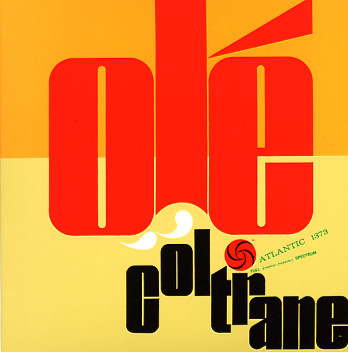 Also available
John Coltrane — Ole (with bonus track) ... CD 6.99
A magnificent little record from John Coltrane – one of his earliest expressions of unbridled spirituality, and a session that we've treasured for years! As you might guess from the title, there's a slight Latin focus to the record – but not one that has congas and bongos creating choppy rhythms – most just a bold, driving, modal sort of inspiration – of the sort that allows the tracks to open up and flow with some of the genius that Coltrane would show more fully later on Impulse! But honestly, we'd rate this one right up there with the best modal sides on Impulse – as the record's got a sense of flow and energy that's simply breathtaking – with lots of long tracks that let Coltrane open up on tenor and soprano sax, and which also feature work from Eric Dolphy (under the "nom du date" George Lane) on alto, plus Freddie Hubbard on trumpet, McCoy Tyner on piano, Elvin Jones on drums, and Art Davis and Reggie Workman on twin basses! The title track "Ole" runs for a whopping 18 minutes, and takes up all of side one – and side two features the great numbers "Dahomey Dance" and "Aisha". The CD includes the bonus track "To Her Ladyship"!  © 1996-2023, Dusty Groove, Inc.
(Out of print.)