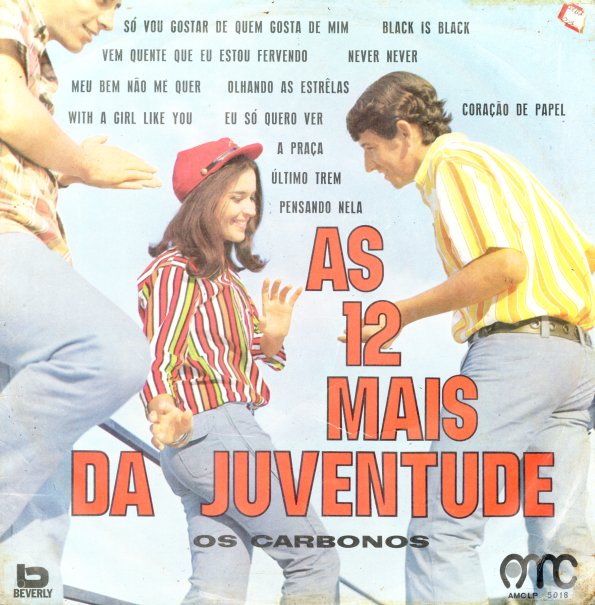 (Vinyl has small paint flecks that click a bit on Side A and plays with some surface noise, with a small sticker on the label. Cover has wear and aging, yellowed tape remnants at the seams, and bent corners.)

Bossa Tres
Audio Fidelity, 1963. Near Mint-
LP...$59.99
Amazing bossa nova from one of Brazil's best combos! The Bossa Tres were led by dynamic pianist Luis Carlos Vinhas – an incredibly strong talent who was as great an arranger as he was a piano player. This album is one of the group's rarest – as it was recorded in New York for the ... LP, Vinyl record album

Tristeza On Guitar (US pressing)
MPS, 1966. Very Good+ Gatefold
LP...$13.99
Sadness on guitar – a perfect title for Baden Powell's work on his chosen instrument, especially the way he could bring a simple but emotive style to his music! Powell's work on guitar here is often quite spare, but beautifully handled – set up with rhythms by a small combo that ... LP, Vinyl record album

Historia Da Musica Popular Brasileira (12 inch LP & booklet)
Abril Cultural (Brazil), 1982. Very Good+ Gatefold
LP...$14.99
A great package of Jobim material, and very nicely produced, like all the other titles in this series! The album features some great compositions by Jobim, including a few lesser-known gems – and the music is performed by a wide range of artists, but all very faithfully to Jobim's ideas. ... LP, Vinyl record album

Das Terras De Benvira
Fontana (Brazil), 1970. Very Good+
LP...$34.99
Fantastic work by one of our favorite Brazilian singers! Geraldo Vandre's work pre-dated the young MPB/Tropicalia generation that included Caetano, Gal Costa, and Gilberto Gil – but even in those days, he wrote with a complicated approach and sophisticated style that spoke volumes of the ... LP, Vinyl record album

Fantastica Bateria 3
Top Tape (Brazil), 1976. Near Mint-
LP...$19.99
This is the third in series of a collection of a great batch of batucada tracks, with very spare raw production that makes them all sound great. Titles include "Repinicando", "No Gemido Da Cuica", "Platinelas De Prata", "Batucando", "Cavacos Vadios" ... LP, Vinyl record album