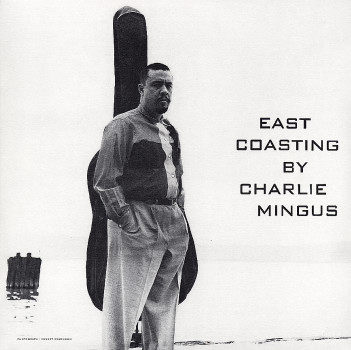 Also available
Charles Mingus — East Coasting ... CD 12.99
Charles Mingus — East Coasting (Japanese pressing – with bonus tracks) ... CD 9.99
One of Charles Mingus' excellent albums for the Bethlehem label – recorded during that magical year of 1957, a real turning point in his career! There's a sharpness here to Mingus' musical vision that hadn't shown up in previous years – a refinement of ideas expressed for Savoy and Prestige on previous sessions, drawn with tighter tension, and a bolder sense of spirit and emotion throughout. The group's a well-chosen batch of modernists – with Shafi Hadi on alto and tenor, Jimmy Knepper on trombone, Clarence Shaw on trumpet, and the surprising addition of Bill Evans on piano – sounding a fair bit bolder here than elsewhere. Titles are almost all Mingus originals with a great balance of modern structures and freer solo moments – and tracks include "Conversation", "West Coast Ghost", "Fifty First Street Blues", "East Coasting", and the sublime "Celia", which Mingus and Hadi performed in the film Shadows by John Cassavettes.  © 1996-2023, Dusty Groove, Inc.