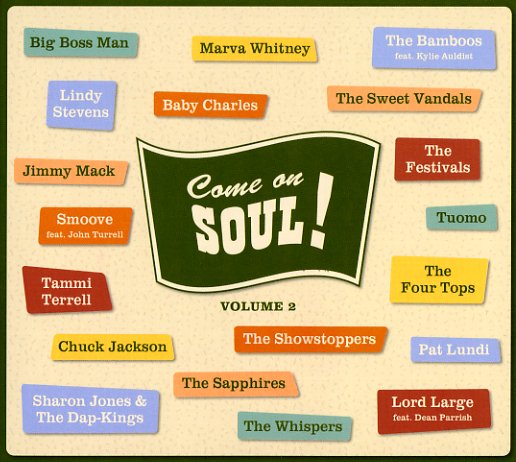 A great mix of classic rave up soul, funk and contemporary numbers that carry on the tradition! Come On Soul! 2 includes hard grooving late 60s & 70s soul singles by Lindy Stevens, Jimmy Mack, The Sapphires, The Four Tops, Tammi Tyrell, Pat Lundi, Chuck Jackson and more – plus neo classic contemporary gems by an international roster of faves – Sharon Jones & The Dap-Kings, Bamboos & Kylie Auldist, Sweet Vandals, Big Boss Man and more. 19 tracks in all: "Pennygold" by Lindy Stevens, "My World Is On Fire" by Jimmy Mack, "Evil One" by The Sapphires, "Don't Take It Too Hard" by Tuomo, "Back Of My Hand" by Baby Charles, "What's Going On" by Sweet Vandals, "Party Music" by Pat Lundi, "I Only Got This Feeling" by Chuck Jackson and more.  © 1996-2023, Dusty Groove, Inc.
(Out of print and still sealed.)

On A Cool Day – The Soulful Side Of Cool Jazz
Outta Sight (UK), Late 50s/Early 60s. Used
CD...$8.99
Not just cool jazz – despite what the title might say – and instead a whole host of soulful jazzy styles from the late 50s and early 60s – pulled forth from the kind of singles that once boomed from backroom jukeboxes in taverns on the south side of town! The collection is great ... CD