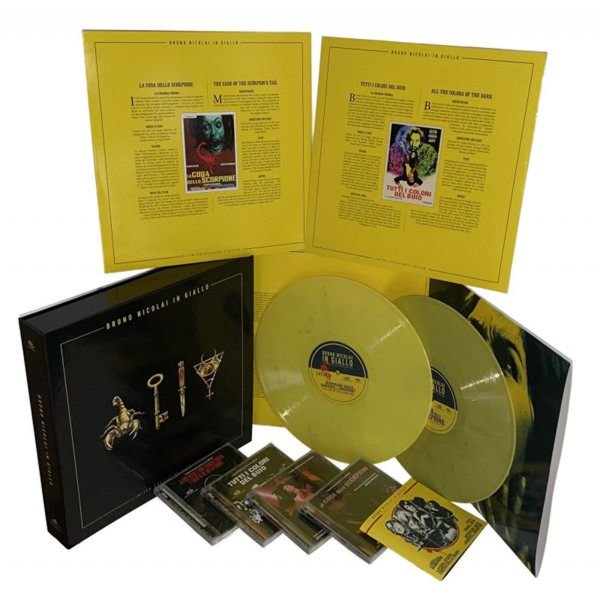 A wonderful package – one that brings together four killer horror soundtracks from Italian maestro Bruno Nicolai! First up is La Coda Dello Scorpione – a dark dark masterpiece from the legendary Bruno Nicolai – written for an equally dark thriller with a wonderful edge! The work here is on a par with that of Nicolai's frequent partner, Ennio Morricone – often using full orchestrations to score a deeper theme in the film – but also often moving to lighter, leaner moments based around a simpler instrumental mode. There's a staccato feel to some of the best moments on the set – spare and edgey, with a sense of dread that's almost palpable! Next is Il Tuo Vizio E Una Stanza Chiusa E Solo Io Ne Ho La Chiave – a wonderful score by Bruno Nicolai – one that follows strongly in the mode of work from the time by frequent collaborator, Ennio Morricone! The approach on most tracks is spare and moody – using a lot of harpsichord over light orchestrations – and going for a tense feel that matches the spirit of the horror film, but which also has some surprisingly sweet and sexy moments from time to time. On Tutti I Colori De Buio, Bruno Nicolai's at his most Morricone-esque – and has crafted a dreamy set of tunes that hardly matches the dark Satanist thriller they were recorded for! The melodies are light, and spare, with isolated and drawn-out piano and string passages – plus some wonderful wordless vocals from the great Edda Dell'Orso – floating along in magical Morricone territory. Apart from a few tense moments, the whole thing has this moodier, mellow feel – with some lighter lovely tunes that would be right at home in a Mondo Morricone type set. Last up is one of our all-time Nicolai favorites, Perche Quelle Strane Gocce Di Sangue Sul Corpo Di Jennifer – one of the greatest soundtracks we've ever heard from Bruno Nicolai – a wonderful array of lightly groovy tunes that's as fantastic as any of the Mondo Morricone work from the same time! The main theme of the film has a catchy La Donna Invisible sort of feel – building on waves of sound with piano over orchestrations, skipping along to an altered bossa beat – showing up in a number of different variants throughout the score. Other tracks are darker and moodier, but really vary things up to fit the moods of the scene – using Morricone-styled bits of harpsichord, violin, or strings to come up with some incredible sounds. This vinyl/CD box features a 2LP set with key themes from all the films, plus individual CD releases of the whole soundtracks – along with a big booklet and a poster!  © 1996-2023, Dusty Groove, Inc.
(Limited edition of 300!)

Piu' Forte Ragazzi (limited 50th Anniversary edition) (180 gram colored vinyl)
Beat (Italy), 1972. New Copy
LP...$32.99 34.99
A groovy little soundtrack – put together by the DeAngelis brothers for one of the earlier pairings of Terence Hill and Bud Spencer – with a sound that's arguably better than most of their later soundtracks! There's plenty of playful elements in the mix – the kind of jaunty ... LP, Vinyl record album

Banana Joe (180 gram colored vinyl)
Beat (Italy), 1982. New Copy
LP...$32.99 34.99
That's the great Bud Spencer on the cover here, starring in one of his wonderfully playful comedies from the early 80s – maybe not the highest level of cinematic brilliance, but always a very good time on the screen! Music is always a key part of these films – and as in others, this ... LP, Vinyl record album

Delitto In Formula Uno
Beat (Italy), Early 80s. New Copy
LP...$32.99 38.99 (CD...$19.99)
Tomas Milian's the scruffy guy on the cover, and the light style of illustration lets you know that you're not in the spooky territory you might expect from Fabio Frizzi – but instead the kind of quickly-done comedy that was big business on the Italian scene of the 80s! With those films, the ... LP, Vinyl record album