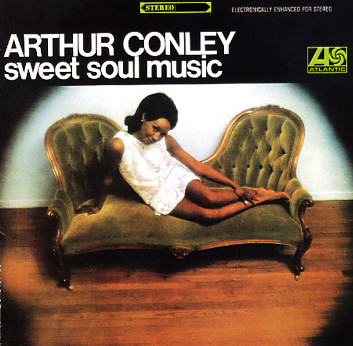 One of the all-time soul classics from Atlantic – the fantastic debut of singer Arthur Conley, introduced as a protege of Otis Redding, who also produced the record! The sound is similar to Otis' own work, but often a fair bit rawer – and Redding works here with both Jim Stewart of Stax and Rick Hall of Fame Studios, ensuring that the album has equal doses of Memphis and Muscle Shoals in the mix! Otis also wrote some great tracks for the album, along with Conley and the legendary Dan Penn – and although the title track is Conley's huge single "Sweet Soul Music", the album is filled with loads of other great original tracks, including "Who's Foolin' Who", "There's A Place For Us", "Wholesale Love", "I'm Gonna Forget About You", and "Let Nothing Separate Us".  © 1996-2021, Dusty Groove, Inc.
(Mono yellow & gray label pressing. Cover has a small cutout hole and a bumped bottom left corner.)