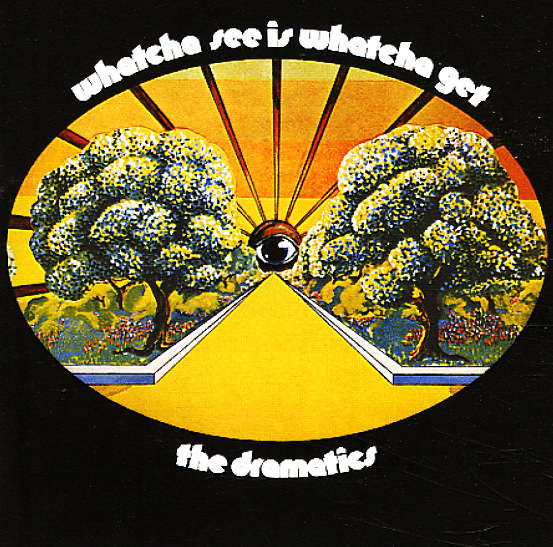 A fantastic album by The Dramatics – with a harder funkier sound than you'll find on most of their other records of the time – a gritty gem from the group's early years, and a record that really deserves its placement on the Stax label! The record has the group moving into a post-Temptations style of righteous soul – grooving hard with a really heavy bottom on funky numbers like "Get Up and Get Down" and "Whatcha See Is Whatcha Get", and even dropping a bit of a drug reference on the cut "Marry Don't Cha Wanna" – one of those messed-up lyric numbers we'd expect from a Latin Soul group! But the album's also got a sweet side too – as it features the amazing ballad cut "In The Rain", which has some of the most amazing production you'll ever find on the Stax label – harmony work that rivals the greatness of the east coast scene of the time. Other tracks include "Gimme Some", "Thank You For Your Love", and "Hot Pants In The Summertime".  © 1996-2022, Dusty Groove, Inc.
(Orange Volt label pressing. Cover has a name in pen and some edge wear. Labels have a name in pen.)

Do The Funky Chicken
Stax, 1970. Very Good+
LP...$38.99 (CD...$4.99)
One of the best Rufus Thomas albums from the 70s – a key record from his comeback years, and one that has him trading in his older R&B mode for a harder, funkier Memphis groove! Rufus was 52 at the time, but thanks to a never-dying fire, and some great youthful arrangements, the set ... LP, Vinyl record album

Live – Doing The Push & Pull at PJ's
Stax, Early 70s. Near Mint-
LP...$11.99
A killer live set by Rufus Thomas – recorded right at the height of his funky comeback, before a very right-on crowd at PJ's Nightclub in LA! Rufus was always a great entertainer, and he really opens up in this live setting – doing some nice versions of "Do The Funky Chicken" ... LP, Vinyl record album

Be What You Are
Stax, 1973. Near Mint-
LP...$14.99 19.99
Warmly grooving 70s soul from The Staple Singers – recorded in a fuller Memphis mode that's miles from their gospel roots, but still plenty darn nice! The style here is very much in keeping with the hit Staples mode of the time – righteous, full, but still nice and earthy at the bottom ... LP, Vinyl record album