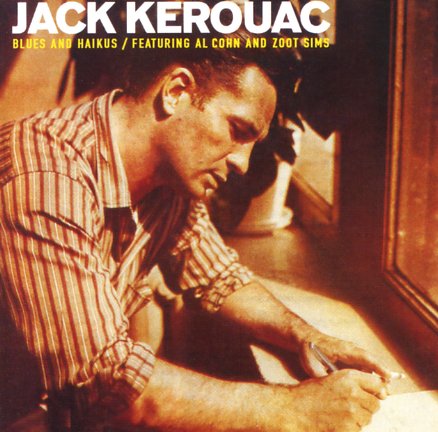 One of the most jazz-based recordings ever done by Jack Kerouac – a set that features some great improvisations from Zoot Sims and Al Cohn! If you only know Cohn and Sims from their more arranged dates of the 50s, you'll really be surprised at their work here – as both players blow lines behind Kerouac, with an earthy, open tone that really matches the spirit of his readings. Sims and Cohn alternate on the long stretch of "American Haikus" on side one – then step back for getnler piano accompaniment on "Hard Hearted Old Farmer" and "The Last Hotel & Some of Dharma". Side two features the longer "Poems From The Unpublished Book Of The Blues" – and Cohn and Sims return again, almost with a bolder force that's totally great.  © 1996-2023, Dusty Groove, Inc.

Poetry For The Beat Generation (clear vinyl pressing)
Hanover/Real Gone, 1959. New Copy (reissue)
LP...$29.99 31.99
A beautifully vivid set from Jack Kerouac – one that has him reading his own music set to spare piano accompaniment by Steve Allen – most of which was improvised for the set! The pairing of Kerouac and Allen seems an unlikely one, but it really works well here – as Jack's quite ... LP, Vinyl record album

Fate Conspires With Destiny To Do Me Dirt – 1959 to 1972 (with bonus 7 inch)
Iron Mountain Analog Research, 1959/1972. New Copy LP & 7 inch Gatefold (reissue)
LP...$8.99 29.99
Completely bizarre work from Brother Theodore – a strange postwar cultural figure who'd arrived in the US from a rescue of the holocaust hellhole of Dachau, then reinvented himself as an offbeat actor and monologist! Theodore's got a very strange voice, one that's partly inflected by his ... LP, Vinyl record album