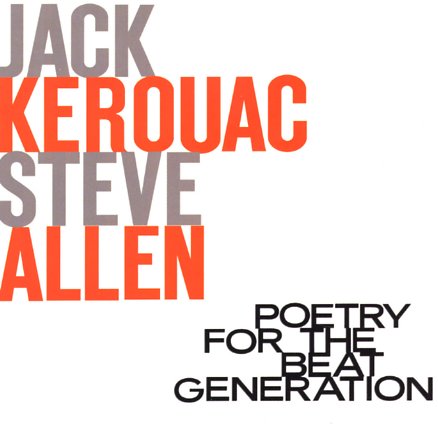 A beautifully vivid set from Jack Kerouac – one that has him reading his own music set to spare piano accompaniment by Steve Allen – most of which was improvised for the set! The pairing of Kerouac and Allen seems an unlikely one, but it really works well here – as Jack's quite relaxed in the studio, and really reads with a bit more feeling than usual – really put at ease by Allen's surprisingly great piano lines, which never try to dominate, and mostly just tinkle lightly behind Kerouac's recitations. Most numbers are short, and titles include "October In The Railroad Earth", "Deadbelly", "McDougal Street Blues", "I'd Rather Be Thin Than Famous", "Charlie Parker", "Dave Brubeck", and "The Sounds of the Universe Coming in My Window".  © 1996-2023, Dusty Groove, Inc.

Blues & Haikus (tan vinyl pressing)
Hanover/Real Gone, 1959. New Copy (reissue)
LP...$27.99 29.99
One of the most jazz-based recordings ever done by Jack Kerouac – a set that features some great improvisations from Zoot Sims and Al Cohn! If you only know Cohn and Sims from their more arranged dates of the 50s, you'll really be surprised at their work here – as both players blow ... LP, Vinyl record album

Fate Conspires With Destiny To Do Me Dirt – 1959 to 1972 (with bonus 7 inch)
Iron Mountain Analog Research, 1959/1972. New Copy LP & 7 inch Gatefold (reissue)
LP...$8.99 29.99
Completely bizarre work from Brother Theodore – a strange postwar cultural figure who'd arrived in the US from a rescue of the holocaust hellhole of Dachau, then reinvented himself as an offbeat actor and monologist! Theodore's got a very strange voice, one that's partly inflected by his ... LP, Vinyl record album