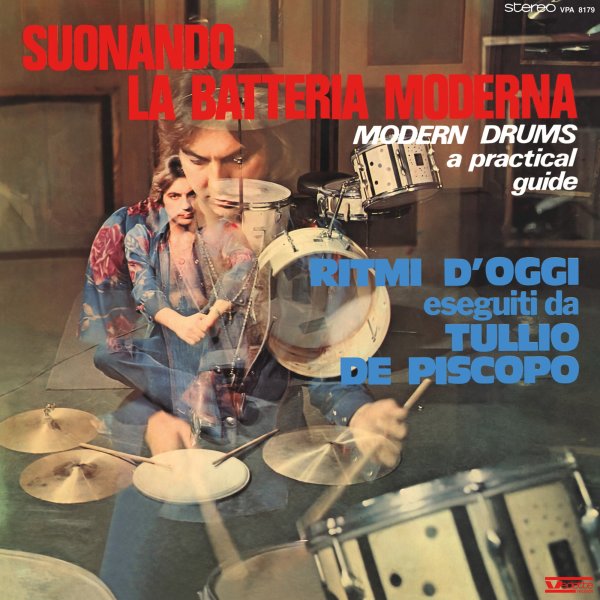 Also available
Tullio De Piscopo — Suonando La Batteria Moderna ... LP 32.99
Legendary drummer Tullio De Piscopo is all by himself on the cover, and that's how he sounds on the record – just playing solo, but with amazing grooves that hardly make you miss the other instruments at all! Tullio's got a long legacy in both jazz and club music – yet this set may be one of his most unique, and one of the purest demonstrations of his talents as a musician – as he manages to serve up these solo tracks that are all rhythmic and very groovy, with a melodic command of the drum kit that fills in all the other elements you might miss – on tracks that move between classic hip hop break cuts, to Brazilian-inflected groovers, to some other rhythmic masterpieces that were certainly years ahead of their time back in 1974! Titles include "Afro Cubano", "Samba Carnival", "Rocking Special", "Afro Jazz", "7/4 Rock", "Fast Afro Samba", "Drum Fantasy", "Onda Nueva 3/4", "Moderato Swing", and "Dodiciottavi".  © 1996-2023, Dusty Groove, Inc.

Sotto E N'Coppa
Carosello/New Platform (Italy), 1975. New Copy
CD...$19.99 22.99 (LP...$38.99)
Italian drummer Tullio De Piscopo is at his most dynamic here – working with his Revolt Group, in a blend of styles that's very heavy on percussion and electric jazz! At some level, the vibe is a bit like some of the more hard-hitting fusion of the Billy Cobham generation in the US – ... CD