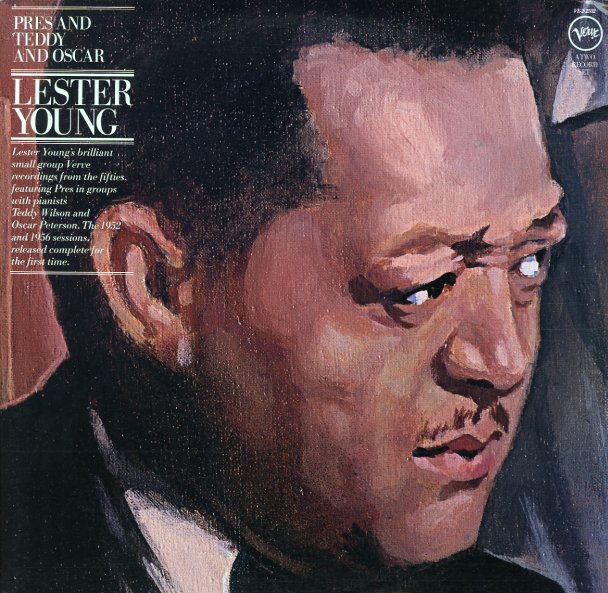 A pairing of 2 mid-50s sides by Lester Young for Verve – one album recorded with Teddy Wilson on piano, the other with Oscar Peterson – hence the title! The Wilson session was recorded in 1956, and featuers Gene Ramey on bass and Jo Jones on drums – with tracks that include "Louise", "Pres Returns", "All Of Me", "Prisoner Of Love", and "Love Is Here To Stay". The Peterson session was recorded earlier, in 1952, with Barney Kessel on guitar, Ray Brown on bass, and JC Heard on drums – with titles that include "Ad Lib Blues", "Star Dust", "I Can't Give You Anything But Love", "There Will Never Ever Be Another You", "I'm Confessin", and "These Foolish Things".  © 1996-2022, Dusty Groove, Inc.
(Cover is fantastic except for a tiny corner bump on the back.)

Pres (Charlie Parker)
Charlie Parker, Early 50s. Near Mint-
LP...$6.99
No real date or personnel on this one, and the album's a live set recorded, most likely, at some time in the 50s. The quality of the recording isn't great, and you hear a heck of a lot of crowd noise – but the work's an interesting document of Pres during the period, as the tunes are all ... LP, Vinyl record album

Master Takes
Savoy, Late 40s. Near Mint-
LP...$4.99
All the mater takes from the key late 40s recordings that Lester Young did for Savoy Records – key transitional material from swing into bop, with work from Billy Taylor and Junior Mance on piano, Freddie Green on guitar, Cozy Cole and Roy Haynes on drums, and Jesse Drakes on trumpet! 15 ... LP, Vinyl record album