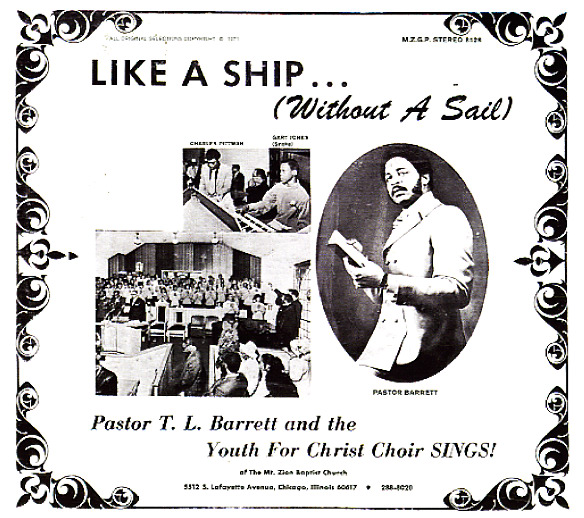 Like A Ship (Without A Sail) (transparent vinyl pressing)

A soul record we'd put up there with some of our favorites produced in Chicago during the early 70s – a gospel album from Pastor TL Barrett, but one that's gone on to legendary status among funk and soul collectors over the years! Barrett works here with his Youth For Christ Choir, of Mt. Zion Baptist Church – a south side ensemble that's filled with genuine spirit and passion, aimed towards lofty ideals – but set up with some deep secular soul production touches and instrumentation that keep things razor sharp throughout! The album was cut at the affordable Sound Market Studio – but behind the soaring, spirited lead and chorus vocal arrangements are players supervised by Chess Records sax player and arranger Gene Barge – with other Chess players Richard Evans and Phil Upchurch on the sessions too. Raw drums, grooving organ, and incredible bass lines lay the foundation, but it's the voices that really shine on this completely wonderful, totally essential set! Titles include "Like A Ship", "Wonderful", "It's Me O Lord", "Ever Since", "Nobody Knows", "Joyful Noice", "Medley/Dr. Watts Hymn & The Disciples Prayer" and "Blessed Quietness".  © 1996-2022, Dusty Groove, Inc.
(Limited "Ice Wind" transparent vinyl pressing.)

God's Prescription
TK/Regrooved (Netherlands), 1978. New Copy (reissue)
LP...$29.99 34.99
Fantastic funky gospel from the 70s – an album cut by singer Camille Doughty for the Gospel Roots imprint of TK Records – and done with a style that has a great mix of funky backings and deep soul vocals! Some of the work is definitely more conventional gospel, but even those tracks ... LP, Vinyl record album

Gospel Truth – The Complete Singles Collection (3LP set)
Stax/Craft, Early 70s. New Copy 3LP Gatefold
LP...$20.99 49.99
An overdue look at a very cool record label – the short-lived Gospel Truth imprint, which was an outlet for the more spiritual side of Stax Records in the early 70s! The music is gospel, but often has plenty of the best Memphis soul elements of more popular Stax/Volt work of the time – ... LP, Vinyl record album