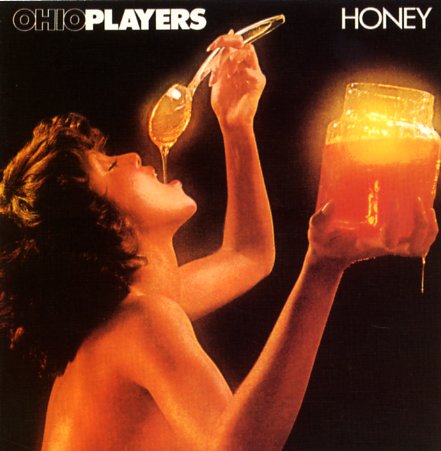 A legendary album from The Ohio Players – a set that's famous not just for its sexy cover, but for the way the group managed to set a whole new standard for mainstream funk at the time! The group started out in the farther reaches of the Midwest underground, and previously had brought some nice psychedelic elements to their music – which here are more focused and folded into a sound that's wonderfully tight, yet still filled with plenty of imagination – a sense of funk that would be beaten down into a more formulaic mode by groups in years to come, but which here is still wonderfully fresh! Most folks go for their big hit "Love Rollercoaster", but we've always been partial to the smooth, mellow funky track "Sweet Sticky Thing", served up here in the cool long version, which has a groove that builds and builds – a completely sublime journey in sound! The whole album's great, though – and other cuts include "Honey", "Fopp", "Let's Love", "Ain't Givin' Up No Ground" and "Alone".  © 1996-2022, Dusty Groove, Inc.
(Includes Mercury inner sleeve. Cover has light edge wear.)

First Impressions
Trip, Late 60s/Early 70s. Near Mint-
LP...$9.99
One of the many obscure albums of material by The Ohio Players – material that was recorded in the late 60's by Capitol, but frequently repackaged and retitled in the early 70's to cash in on the big hit status of the band. The band has elements of their funky 70s style on Westbound – ... LP, Vinyl record album

Propositions
Mercury, 1982. Very Good-
LP...$3.99
Tightly grooving work from The Bar-Kays – a set that's light years away from the sound of their Memphis roots, but still plenty darn funky overall! The album's got a tight bass-heavy approach to the music – the well-forged ensemble sound that graced the later years of the Bar-Kays' ... LP, Vinyl record album