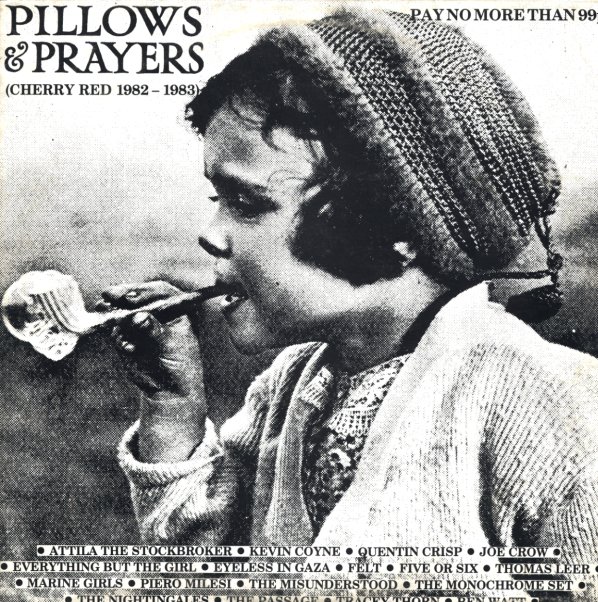 Also available
Various — Pillows & Prayers – Cherry Red Records 1981 to 1983 ... LP 24.99
Various — Pillows & Prayers – Cherry Red Records 1981 to 1983 (3CD set – with bonus tracks) ... CD 32.99
An early 80s set from Cherry Red Records, and one that shows just how important the British label was to the world of post-punk music at the time – as you'll hear from an assortment of tracks that's more than enough to give labels like Factory or Rough Trade a run for their money! Cherry Red always had a way of thinking outside of the norm – mixing experimental sounds with more tuneful moments, and sometimes showcasing artists who weren't afraid to put their feelings on the line – at a level that other British indies would pick up more strongly a few years later. There's plenty of formative sounds here – and titles include "Plain Sailing" by Tracy Thorn, "My Face Is On Fire" by Felt, "No Noise" by Eyeless In Gaza, "Don't Blink" by The Nightingales, "Some Things Don't Matter" by Ben Watt, "Modi 2 (extract)" by Piero Milesi, "All About You" by Thomas Leer, "Portrait" by Five Or Six, "Eine Symphonie Des Grauens" by The Monochrome Set, "Lazy Ways" by The Marine Girls, "I Unseen" by The Misunderstood, and "On My Mind" by Everything But The Girl.  © 1996-2023, Dusty Groove, Inc.

Distant Shore
Cherry Red (UK), 1982. Used
CD...$6.99
A beautiful record, recorded in the days when Tracy Thorn was just a wee girl, and before she hooked up with Ben Watt to form Everything But The Girl. Despite her young age, though, the songs are incredibly mature, and the 8 tracks on here are still some of the best songs ever written about ... CD