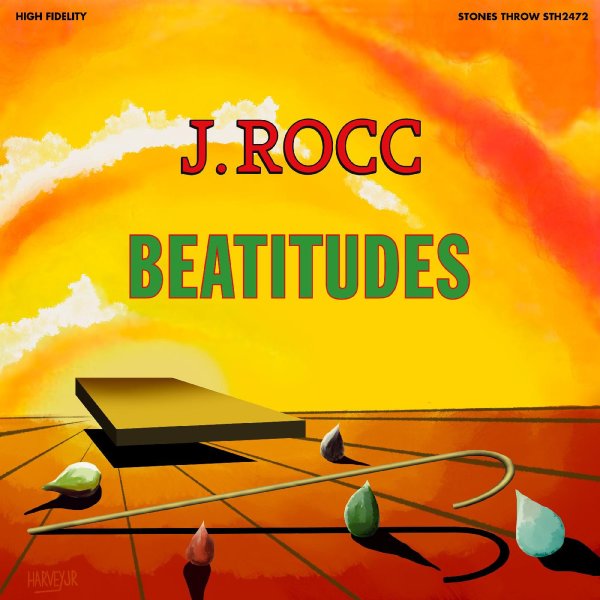 We love the cover on this one, which is an homage to the legendary run of gospel albums on Savoy Records back in the day – a fitting touch for the vibe of the record, which has J Rocc serving up a host of instrumental hip hop tracks that are all filtered with plenty of gospel touches too! The beats are wonderful – what we love from J Rocc, but somehow more uplifting – especially when he samples old singers and choirs and uses them in a really subtle way – almost replacing what might be keyboard lines with the righteousness of the vocals! Titles include "The Choir", "In Your Soul", "Don't Give Up", "The Preacher", "The Beast", "Listen To The Music", and "Joy & Peace".  © 1996-2023, Dusty Groove, Inc.

Marlowe 2 (blue & white vinyl pressing)
Mello Music Group, 2020. New Copy (reissue)
LP...$29.99 31.99
Marlowe's music shows us that the North Carolina scene is alive and well – and has evolved strongly since the work from other artists on that scene in the first decade of the century! The production of L'Orange is fantastic – really fresh and crisp, and with a vibe that feels like he's ... LP, Vinyl record album

1988
Stones Throw, 2020. New Copy
LP...$23.99 24.99
A rock solid effort from one of the finer producers on Stones Throw at this stage in the label's esteemed history! If you expect 1988 to be throwback effort by the number title, think again, but he's not as predictable as that anyway. He sets an impeccable and unpredictable mood that stays rooted ... LP, Vinyl record album

Me Against The World (180 gram pressing)
Jive/Interscope, 1995. New Copy 2LP Gatefold
LP...$36.99 39.99
Just before he got too hot for Jive and jumped to Death Row, this is the album where Pac moves above the Thug Life image he worked so hard to craft and delivered the lyrical goods with both his street stories and more introspective rhymes – helping set up his legacy as one of the most soul ... LP, Vinyl record album

Awaken My Love (with download)
Glassnote, 2017. New Copy
LP...$23.99 28.99
Childish Gambino once again transcends anything you might be expecting from an actor/musician – this is not some vain star trip at all, but a worthy, boundary-busting effort – and a pretty sizable step away from idiosyncratic, yet accessible hip hop into spacey pop funk! Strong stuff, ... LP, Vinyl record album