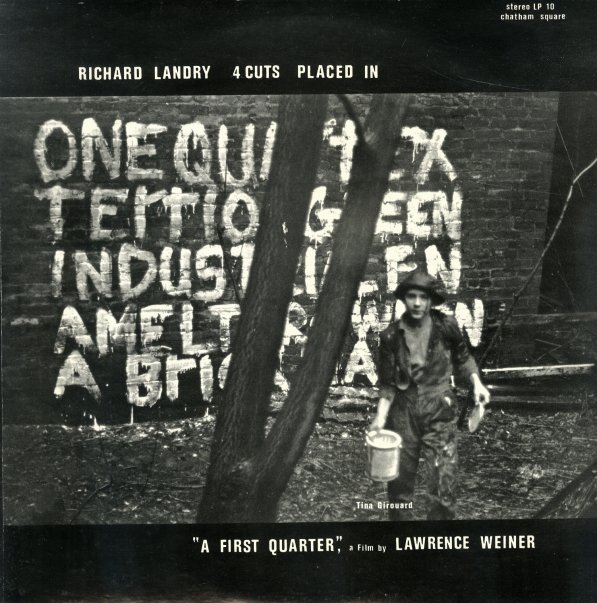 4 Cuts Placed In A First Quarter

A jazz set, but one with pretty strong ties to the art world – given that the whole thing was engineered by Kurt Munkacsi, and produced by the Leo Castelli Gallery! Richard Landry's music is a mix of spiritual and more avant modes – sometimes used in very free lines, sometimes a bit more swinging – and each track on the set has a slightly different instrumental approach. "Requiem For Some" has Landry on flute and tenor, with Richard Peck on tenor, Robert Prado on trumpet, Rusty Glider on bass, and David Lee on drums. "4th Register" is solo tenor; "Piece For So" is solo bass from Glider; and "Vivace Duo" features Landry and Peck on tenor saxes. The album's title is a reference to a film by Lawrence Weiner, who used four of the cuts on the soundtrack!  © 1996-2022, Dusty Groove, Inc.
(Includes download!)

Having Been Built On Sand
Unseen Worlds, 1978. New Copy (reissue)
LP...$20.99 23.99
A beautiful meeting of jazz and art from reedman Richard Landry – a player whose too-small legacy is due in part to the fact that he was often tied more with the art world than the music scene! That's certainly the case here – as the album was recorded in the open space of the studio ... LP, Vinyl record album

Alan Braufman Live In New York City – February 8, 1975 (3LP set)
Valley Of Search, 1975. New Copy 3LP Gatefold
LP...$39.99 43.99
A never-issued live performance from reedman Alan Braufman – and a set that was recorded on radio, right before his classic album on the India Navigation label! The vibe here is maybe even more spiritual and freewheeling than that set – a recording that shows just what a key plays ... LP, Vinyl record album