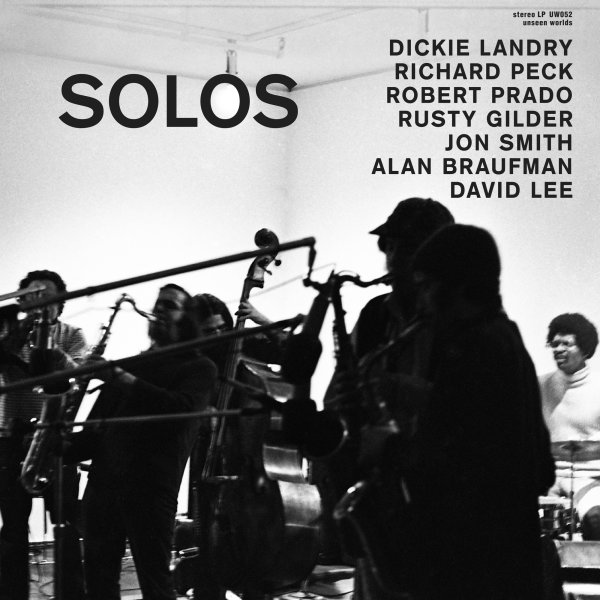 A really amazing bit of free jazz – hardly the set of solos you might guess from the title, and instead a performance of live improvisation by a larger group – done at the famous Leo Castelli Gallery, an important locale for avant activity on the downtown scene in New York in the 70s! There's more of a European free jazz vibe going on here than some of the loft work of the city at the time – with searing work from leader Richard Landry on tenor, soprano sax, and electric piano – alongside Richard Peck on tenor, Robert Prado on trumpet, Jon Smith on tenor, Allan Brafman on alto, and David Lee on drums – all captured on tape by Kurt Munkacsi, the sonic force known for some more important avant classical sides of the time. The set features seven selections in all – some pushing well past the 15 minute mark!  © 1996-2022, Dusty Groove, Inc.
(Includes download!)

4 Cuts Placed In A First Quarter
Chatham Square/Unseen Worlds, 1972. New Copy (reissue)
LP...$20.99 23.99
A jazz set, but one with pretty strong ties to the art world – given that the whole thing was engineered by Kurt Munkacsi, and produced by the Leo Castelli Gallery! Richard Landry's music is a mix of spiritual and more avant modes – sometimes used in very free lines, sometimes a bit ... LP, Vinyl record album

Having Been Built On Sand
Unseen Worlds, 1978. New Copy (reissue)
LP...$20.99 23.99
A beautiful meeting of jazz and art from reedman Richard Landry – a player whose too-small legacy is due in part to the fact that he was often tied more with the art world than the music scene! That's certainly the case here – as the album was recorded in the open space of the studio ... LP, Vinyl record album

Alan Braufman Live In New York City – February 8, 1975 (3LP set)
Valley Of Search, 1975. New Copy 3LP Gatefold
LP...$39.99 43.99
A never-issued live performance from reedman Alan Braufman – and a set that was recorded on radio, right before his classic album on the India Navigation label! The vibe here is maybe even more spiritual and freewheeling than that set – a recording that shows just what a key plays ... LP, Vinyl record album