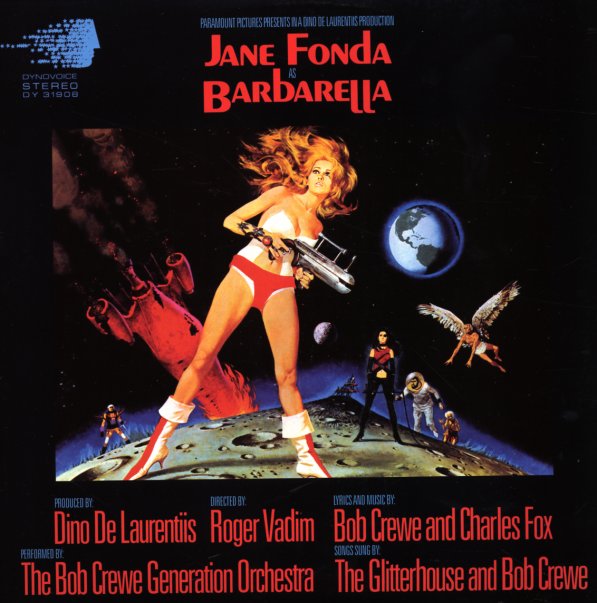 One of the most insanely wonderful soundtracks from the late 60s – filled with weird instrumental touches and sublimely groovy vocals that really match the mad spirit of the film! Although Bob Crewe's best known for his work as a producer for bigger names in the 60s, he really shines here on this set – stepping out with a mad mix of styles that blends 60s adult easy with spacier themes – using primitive electronics and odd studio tricks to capture the cartoony space landscape of Jane Fonda's world in the move. The Glitterhouse sing on a few cuts, in a great mod rock soundtrack mode – and the pacing, timing, and overall presentation of the music here is really great – an audio document that almost feels like a "sonic film" in and of itself! Tracks include "Barbarella", "Ski Ride", "Hungry Dolls", "Entrance Into Sogo", "The Pill", "Smoke (Viper Vapor)", "I Love All The Love In You", "The Labyrinth", "The Sex Machine", "The Chamber Of Dreams" and many more.  © 1996-2021, Dusty Groove, Inc.
(Original pressing! Cover has some light wear and a cutout hole, but this is a nice copy overall.)

Oklahoma Crude
RCA, 1973. Near Mint-
LP...$4.99
An unusual one for Henry Mancini – and a real depature from his usual groovy soundtrack work, in favor of a western-themed batch of tunes! As you'd guess from the title, the album's got a distinct "Texas" sound – with tracks that kind of mosey along in a spaghetti western ... LP, Vinyl record album