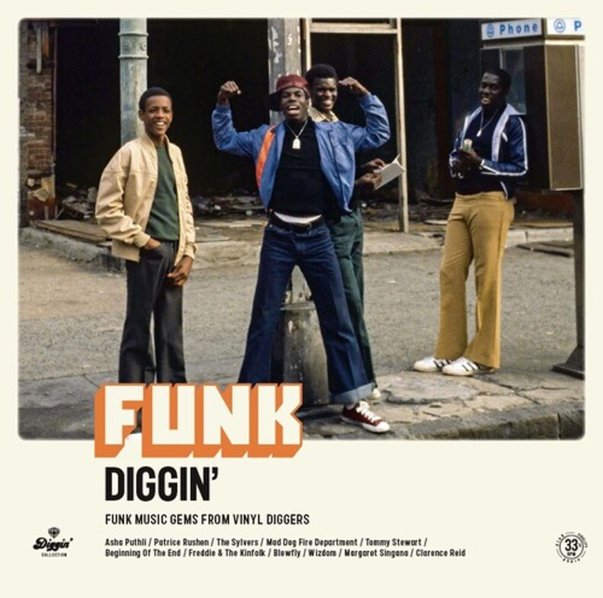 The diggin comes easy when you know where to start – and that's definitely the case here, in a set funky nuggets from the 70s – some well-known, some more obscure, and all working together to make for a mighty tight little collection! There's a number of tracks here from the Miami scene, mixed with work from some farther-flung points – and all the cuts on the collection have a nice hard edge – that moment when funk was advanced a bit more past the 45rpm underground, yet still hadn't gotten too polished or commercial! Titles include "Handle It" by The Sylvers, "Nobody's Butt But Yours Babe" by Blowfly, "Mashed Potato Popcorn" by Freddie & The Kinfolk, "Come On Baby" by Beginning Of The End, "Hang It Up" by Patrice Rushen, "Cosmic Funk" by Mad Dog Fire Department, "Flying Fish" by Asha Puthli, "Bump & Hustle Music" by Tommy Stewart, "Why Did You Do It" by Margaret Singana, "I'm So In Love With You" by Wizdom, and "Till I Get My Share" by Clarence Reid.  © 1996-2022, Dusty Groove, Inc.

Give Me The Funk Vol 2 – The Best Funky-Flavored Music
Wagram (France), Mid 70s. New Copy
LP...$23.99 24.99
A hefty collection of funky nuggets – all key 70s tracks, with a nice focus on the sort of sharp-edge material that's gone on to form the basis of famous samples over the years! Yet all these tracks are more than great enough on their own – not obscure works from the farther reaches of ... LP, Vinyl record album