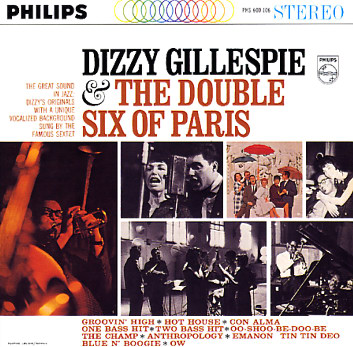 A rare 60s meeting of groovy talents from both sides of the Atlantic – and a record that matches the trumpet of Dizzy Gillespie with the hiply swinging vocals of The Double Six Of Paris! The group were a wonderfully groovy precursor to the Swingle Singers – and sung in a scatting approach to jazz vocals that was very much in the tradition of Lambert, Hendricks, & Ross – but also drew inspiration from the earlier work of Eddie Jefferson, King Pleasure, and others. Their sound is great – much more 60s groovy than some other vocal groups – and pairing them with Dizzy gives this record an added punch that some of their other sessions are missing! Backing is small combo throughout – with either Bud Powell or Kenny Barron on piano, Kenny Clarke on drums, and James Moody on tenor – and with the presence of Diz, most of the material here is of bop orientation – taken at a fast and lively clip! Lalo Schifrin arranged the whole session too – and titles include "One Bass Hit", "Blue N Boogie", "Emanon", "Groovin High", "Ow", "The Champ", "Tin Tin Deo", "Hot House", and "Con Alma".  © 1996-2023, Dusty Groove, Inc.
(Stereo pressing with deep groove. Cover has light wear, some aging and a small sticker spot.)

Dizzy In Greece
Verve, 1956. Very Good
LP...$9.99 24.99
Dizzy's in Greece, looking very cool in a fez on the cover – and really wailing hard with a larger group that includes Billy Mitchell, Charlie Persip, Lee Morgan, Wynton Kelly, and Phil Woods! The mode here is still quite boppish, despite the larger size of the ensemble – but Dizzy ... LP, Vinyl record album

In The Beginning
Prestige, Late 40s/1973. Near Mint- 2LP Gatefold
LP...$14.99 24.99
Nice 2LP set that brings together a huge amount of pivotal work from the early bop years of Diz, including titles recorded for the Guild and Musicraft labels, as well as Prestige. The set's an essential one, because although you often hear references to this material, most of it was originally ... LP, Vinyl record album

Jazz Guitarist – Elek Bacsik
Philips, 1962. Very Good
LP...$14.99
Great work from one of the most unique guitarists on the European scene – working here in trio formation, with either Pierre Michelot or Michel Gaudry on bass, and Kenny Clarke or Daniel Humair on drums! The tracks are short and tight – with hints of Django, but also some other unique ... LP, Vinyl record album

Lars Gullin/Ake Persson
Philips (Sweden), 1957. Very Good+
LP...$29.99 34.99
A tremendous team from the Swedish scene of the 50s – Lars Gullin on baritone sax and Ake Persson on trombone – as great of a match on their instruments as Gerry Mulligan and Bob Brookmeyer in the US! But the music of Gullin and Persson is no simple copycat of American modes either ... LP, Vinyl record album

Brubeck Time (Philips)
Philips (Netherlands), 1954. Very Good-
LP...$6.99
An early version of the quartet – with Paul Desmond on alto, Bob Bates on bass, and Joe Dodge on drums. Titles include "Audrey", "Jeepers Creepers", "Stompin For Mili", "A Fine Romance", and "Brother Can You Spare A Dime". LP, Vinyl record album

On A Clear Day – Live At Van 99 Hall
Philips (Japan), 1975. Very Good+
LP...$43.99 (CD...$18.99)
Lovely work from this overlooked Japanese pianist – a really great player who hits some warmly soulful grooves in this mid 70s set! The album features Kunihiko Sugano's trio working with an extra percussionist – a player who doesn't step in much, but who manages to bring a special sort ... LP, Vinyl record album

Doldinger Jazz Made In Germany
Philips (Germany), 1963. Very Good-
LP...$28.99
A fantastic set from the young Klaus Doldinger – hardly jazz made in Germany, as the whole thing has a smoking soul jazz quality to rival the best on Prestige Records at the time! Klaus plays tenor throughout – in a fantastic combo that features Hammond organ from the great Ingfried ... LP, Vinyl record album