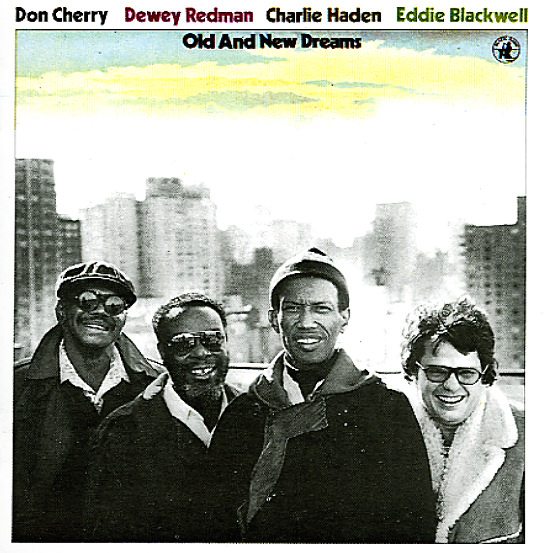 The first album from this key group of Ornette Coleman alums – an all-star combo that features work from Don Cherry on pocket trumpet, Dewey Redman on tenor, Charlie Haden on bass, and Ed Blackwell on drums! The sound here is quite Ornette-inspired at times – with a definite late 70s harmelodic groove – but given the organic, acoustic nature of the lineup, the sound is almost more faithful to Coleman's vision than Ornette's records of the time. Haden and Blackwell are great together, as always – driving the tunes with a rhythmic force that Cherry and Redman can't help but carry through. Titles include "Handwoven", "Dewey's Tune", "Chairman Mao", "Next To The Quiet Stream", "Augmented", and "Old & New Dreams".  © 1996-2023, Dusty Groove, Inc.

Earth Passage Density
Black Saint (Italy), 1981. New Copy (reissue)
LP...$24.99 29.99
One of the excellent non-Art Ensemble sessions cut by the team of saxophonist Joseph Jarman and percussionist Don Moye – work that draws on their experience in the groundbreaking Chicago group, but also takes them into rich new territory on their own! The group's a quartet – with ... LP, Vinyl record album

Tribute To Blackwell
Black Saint (Italy), 1990. New Copy (reissue)
LP...$24.99 26.99
A tribute to Ed Blackwell, and one that features the legendary drummer himself – as part of the excellent Old & New Dreams from the 80s! The work was recorded during a Blackwell tribute festival in 1987 – and the group features Don Cherry on trumpet, Dewey Redman on tenor, and ... LP, Vinyl record album