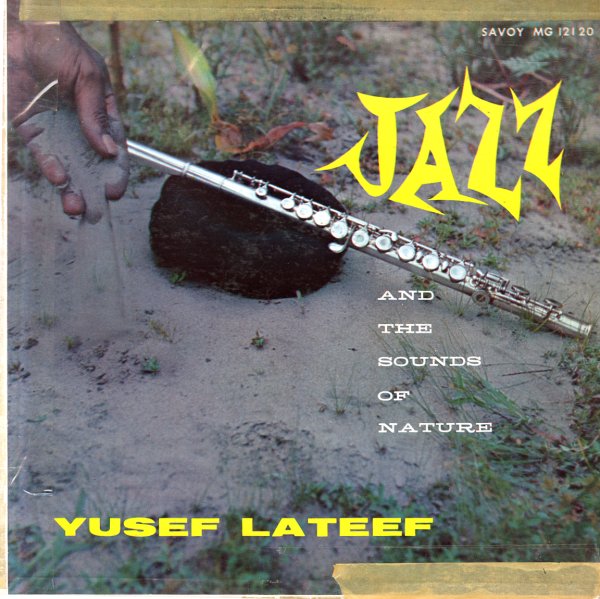 Jazz & The Sounds Of Nature

One of Lateef's fantastic early albums for Savoy – with a style that mixes jazz with weird Eastern instrumentation and tribal rhythmas – for a sound that's somewhere between Sun Ra and later stuff on Tribe records. Lateef's playing with great players from the Detroit underground of the 50's, including Hugh Lawson, Ernie Farrow, and Oliver Jackson, and they run through tracks like "Sounds Of Nature", "Gypsy Arab", "Seulb", and "8540 12th Street".  © 1996-2021, Dusty Groove, Inc.
(CONDITION FAIR. Red label pressing with RVG stamp. Cover has completely split seams and some aging.)

Opus De Jazz (first cover)
Savoy, 1955. Very Good
LP...$19.99
One of the best-known 50s jazz sessions from the Savoy label – a laidback classic that's a great illustration of the label's shift in modes after the early bop years! The setting here is relatively informal – with Milt Jackson as the ersatz leader, working almost in blowing session ... LP, Vinyl record album

Philosophy Of Urso
Savoy, Early 50s. Very Good+
LP...$39.99
One of the few albums ever issued as a leader by Phil Urso – a bright young tenor star in the 50s, known for his work with Chet Baker and Stan Getz! The album features Urso in 3 different settings – one with Getz alumni that include Bob Brookmeyer and Horace Silver, grooving hard on ... LP, Vinyl record album

Jazz For Playboys
Savoy, Mid 50s. Very Good+
LP...$19.99
One of those classic 50s sessions in which a bunch of Count Basie players split off from the bigger group and do some great small combo work on their own! The album is leader-less in its billing – but only because all the players are so well tuned to each other, and have such a simpatico ... LP, Vinyl record album

All About Ronnie
Savoy, Mid 50s. Very Good
LP...$9.99
One of the most obscure modern jazz albums on Savoy – an obscure album that's also one of the few dates as a leader from pianist Ronnie Ball! Also features Ted Brown on tenor, Willie Dennis on trombone, Wendell Marshall on bass, and Kenny Clarke on drums – on titles that include "P ... LP, Vinyl record album