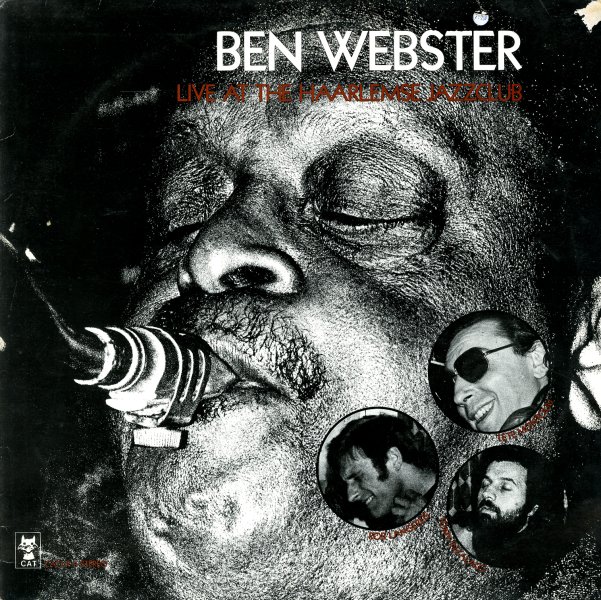 Live At The Haarlemse Jazzclub

Ben Webster plays live in Harlem – not the uptown scene in New York, but the Dutch city that became a surprisingly strong showcase for American players overseas! The date's got that easygoing style of some of Webster's best late live performances – a laidback rhythm trio, and Ben himself blowing these raspy, blue-tinged notes that are full of feeling – even when in a familiar setting – that quality that can make even subtle handling of a standard pop out with such Webster-like charm! The group features Tete Montoliu on piano, Rob Langereis on bass, and Tony Inzalaco on drums – and titles include "Stardust", "How Long Has This Been Going On", "Sunday", "For All We Know", and "Perdido".  © 1996-2022, Dusty Groove, Inc.
(Out of print.)

See You At The Fair
Impulse (Germany), 1964. Used
CD...$2.99 6.99
A great little album from Ben Webster – perhaps not his most sophisticated, jazz-wise, but done up in a cool cover that has him standing in front of the steel globe at the 1964 World's Fair in New York. The music on the disc has a similar optimistic approach – as Ben solos lightly over ... CD

Ben Webster & Associates (Verve master edition)
Verve, 1959. Used
CD...$6.99
Classic late Webster material, recorded in a laidback setting for Verve, with associates that include Coleman Hawkins, Budd Johnson, Roy Eldridge, Jimmy Jones, and Les Spann. Side one is a very long version of "In A Mellow Tone", with a blowing session solo approach – and side two ... CD

Warm Moods
Reprise, 1961. Used
CD...$6.99
One of the all-time great ones by Ben Webster! The album was recorded near the end of Webster's all-too-short time on this planet – at a point when he had really perfected a sorrowful tone on tenor, and a strangely sinister approach to ballads – one that gave even familiar tunes an ... CD