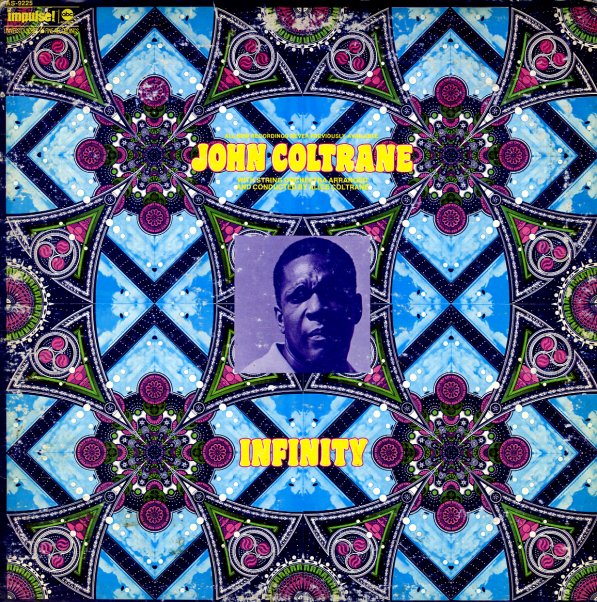 The John Coltrane sound stretching out to Infinity – beautifully collaborating core spiritual sounds recorded when The Great One was still alive, and later string passages done by Alice Coltrane in the early 70s! The initial tracks are very open and almost easygoing – not the full-on outside expressions of some other Coltrane unreleased sides from the time, but the more cosmic sound of Love Supreme – carried out by musicians that include Alice Coltrane on harp, piano, and organ – plus Pharoah Sanders on tenor, McCoy Tyner on piano, Jimmy Garrison and Charlie Haden on bass, Rashied Ali on percussion, and Elvin Jones on drums. The strings are surprisingly wonderful, too – kind of linking the Coltrane and post-Coltrane generations in ways that are really marvelous, and filled with the kind of majesty that Coltrane should have deserved while still on this planet! Titles include "Living Space", "Joy", "Leo", and "Peace On Earth".  © 1996-2021, Dusty Groove, Inc.
(Original white label promo. Vinyl has a mark that clicks a bit on "Peace On Earth". Cover has some edge wear.)

Blues & The Abstract Truth (profile cover)
Impulse, 1961. Very Good Gatefold
LP...$33.99 (CD...$5.99, LP...$22.99)
One of the all-time classics of early 60s mainstream jazz – and a beautiful record that showcases writing and arranging talents of Oliver Nelson! Nelson had been bumping around a variety of sessions before this one – as a leader, sideman, and arranger – but it was with this album ... LP, Vinyl record album