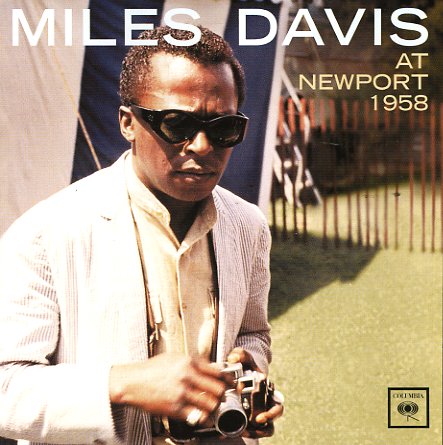 Also available
Miles Davis — Miles Davis At Newport 1958 ... CD 3.99
The full story of Miles Davis at the Newport Jazz Festival in 1958 – an album that expands out the original half-album release of this material from the set that Miles shared with Thelonious Monk! The first half of the record features the three tracks that appeared on Miles & Monk At Newport – and the remaining material joins it here for the first time in one date – making for a well-rounded package that finally tells the whole tale of the group's performance on July 3, 1958! The lineup here is right in the Kind Of Blue mode – Cannonball Adderley on alto, John Coltrane on tenor, Bill Evans on piano, Paul Chambers on bass, and Jimmy Cobb on drums – but the overall sound is a bit looser and freer, much more turned towards the solo spotlight focus that often characterized Miles Davis' live work. Coltrane's solos alone are worth the price of admission – nicely sharp-edged, with a sound that he didn't always show on his own albums until the 60s – and titles include "Ah Leu Cha", "Straight No Chaser", "Fran Dance", "Two Bass Hit", "Bye Bye Blackbird", and "The Theme".  © 1996-2023, Dusty Groove, Inc.
(Tray card is missing one spine.)