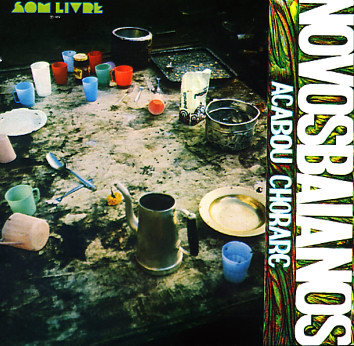 Certainly one of the greatest albums by this excellent (and oft-overlooked!) group from the 70s! The band of young Bahians deliver a great mix of tracks tinged with bits of rock, funky samba, and even a few psychedelic influences – with alternating male and female vocals, and some excellent songwriting that places the record right up there with some of the best work by Caetano Veloso and Gilberto Gil from the same time. We love this one to death, and find it to be one of the few records by the group that we return to again and again. Tracks include "Preta Pretinha", "Besta E Tu", "A Menina Danca", "Swing De Campo Grande", and "Tinindo Trincando".  © 1996-2023, Dusty Groove, Inc.
(Limited edition on split blue & yellow vinyl!)

Carolina
Mr Bongo (UK), 2002. New Copy 2LP
LP...$27.99 28.99
A HUGE batch of samba-soul grooves from Seu Jorge! Jorge previously knocked around Brazil as a member of the late 90s pop group Farofa Carioca, but his first solo outing is a massive step forward into the upper echelon of the Brazilian scene! Like the best of his contemporaries, Jorge uses the ... LP, Vinyl record album