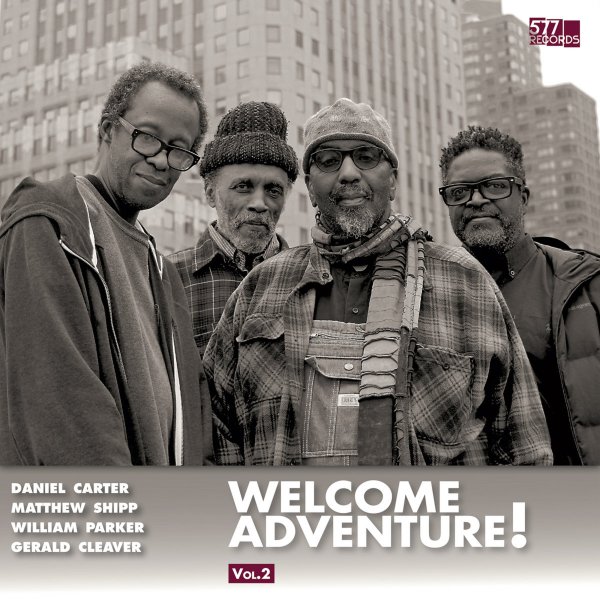 Also available
Daniel Carter/Matthew Shipp/William Parker/Gerald Cleaver — Welcome Adventure Vol 2 ... CD 11.99
One of those records that just makes us say "wow" right from the very first note – a perfect showcase for all musicians involved, and a really mighty meeting of the creative minds! We've really loved the strong return to form that Matthew Shipp has given us on piano in recent years – and of course, the basswork of William Parker is always tremendous – but they both somehow rise even more to the top alongside the drums of Gerald Cleaver and reeds of Daniel Carter – in a session that's wonderfully spiritual, very rhythmic, and often quite straight at times! There's a balance between the avant impulses of the players and the collective action of the group – almost recalling the loft jazz years, but more contemporarily righteous too – and this second volume features titles that include "Wordwide", "Mask Production", "Da Rest Is Story", and "Blinking Down".  © 1996-2023, Dusty Groove, Inc.

Music Frees Our Souls Vol 2
577, 2022. New Copy
LP...$20.99 24.99
There's a nice variation here to the previous album from Francisco Mela with this title – and that difference is pianist Cooper-Moore, who steps into the place that Matthew Shipp held in the previous trio – and brings all sorts of wonderful sounds and flavors into play! Mela's a great ... LP, Vinyl record album

Segue To Infinity (4LP colored vinyl pressing)
Numero, Late 70s. New Copy 4LP Set
LP...$79.99 85.99
A beautiful tribute to the spiritual genius of Laraaji – a set that features both his debut album and six more extended tracks that were never issued at the time! That debut album is his legendary Celestial Vibrations – a beautifully trippy set of tracks from Edward Larry Gordon – ... LP, Vinyl record album