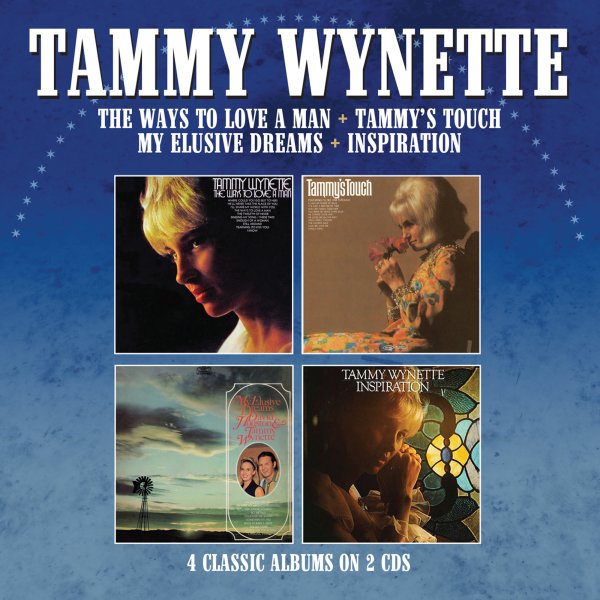 Four classic early albums from Tammy Wynette – all served up here in a single collection! On Ways To Love A Man, Tammy Wynette's maybe a bit less brash on the cover than some of her earlier records, but she's still completely sublime – really in that standard-setting mode that made her one of the most important female singers in country music at the time! Wynette's a surprisingly strong writer, too – and some of the best cuts here were penned by the lady herself, including two done in partnership with George Jones – all produced to perfection by Billy Sherrill, with that amazing ear that helped him elevate so much great country work during this generation. Titles include "Still Around", "These Two", "The Ways To Love A Man", "I'll Share My World With You", "Enough Of A Woman", "I Know", and "Singing My Song". Tammy's Touch continues the wonderful run of sublime sounds that Wynette crafted with Billy Sherrill in the studio – music that's as deep as the sound he was about to bring to the work of George Jones – a real maturation forward of modes that were already great in 60s country, and even better here! Titles include "I'll See Him Through", "Love Me Love Me", "The Divorce Sale", "He Loves Me All The Way", "Our Last Night Together", "A Lighter Shade Of Blue", "Lonely Days", "He Thinks I Love Him", and "Cold Lonely Feeling". My Elusive Dreams is a wonderful set that has the vocals of Tammy Wynette teaming up with those of David Houston – a singer best known for the famous title cut, but even better here in the company of Tammy! The pair are a slightly different duo than some of the other country couples of the time, and there's a nice sense of variety on the record – including a solo track by each singer – Houston on "Clinging Vine", and Wynette on "Set Me Free, which is a great remake of the Charlie Rich tune. Other cuts include "Something Stupid", "Together We Stand", "Marriage On The Rocks", "It's All Over", "I'll Take My Chances With You", and a nice remake of "My Elusive Dreams". On Inspiration, Tammy Wynette takes on the great tradition of inspirational country music – serving up themes and songs that are much more the territory of Sunday morning than Saturday night – but which get a really great contemporary spin, thanks to the perfect production of the great Billy Sherrill! As Sherrill did for Charlie Rich and George Jones during the same generation, the album is way more than you might guess from the cover – full of really well-done arrangements that get past any too familiar modes – as Tammy makes every tune her own, in a lineup that includes "You'll Never Walk Alone", "Count Your Blessings Instead Of Sheep", "Just A Closer Walk", "He", "It Is No Secret", and "May The Good Lord Bless & Keep You".  © 1996-2023, Dusty Groove, Inc.