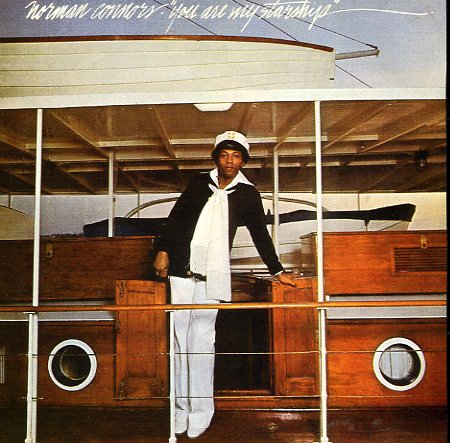 You Are My Starship

A masterpiece of mellow soul and jazzy grooves from the groundbreaking Norman Connors – an album that sails to the stars on a sweet blend of mellow moments and more upbeat tracks too! The record features some crucial vocal talents from Michael Henderson and Phyllis Hyman – both relative newcomers here, and making a great transition from jazz to soul with Connors help – hitting this amazing territory that would inform countless other artists in years to come – but never be done again this well! The instrumentation is wonderful, too – schooled in the jazz roots of Connors' music – and featuring Gary Bartz on alto, and both Hubert Eaves and Onaje Allen Gumbs on keyboards. Titles include the seminal title cut "You Are My Starship" – one of the best late night slowjams ever – plus remakes of "The Creator Has a Master Plan" and "Betcha By Golly Wow" – and the cuts "So Much Love", "Just Imagine", and "We Both Need Each Other".  © 1996-2022, Dusty Groove, Inc.
(Cover has a cutout notch and RCA sticker.)

Portrait
Buddah, 1970. Near Mint- Gatefold
LP...$7.99
A wonderful record by The 5th Dimension – hip, sophisticated, and one that shows that they had a depth that went beyond simple soul harmonies! The proof of this is the group's killer track "One Less Bell To Answer", one of the frankest songs about adult love and breakup to ever ... LP, Vinyl record album

Oh What A Night/Stay In My Corner (aka It's Not Unusual)
Buddah/Vee Jay, 1965. Near Mint-
LP...$9.99
Originally issued in 1965 by Vee Jay, and a wonderful album – unlike anything else the Dells ever recorded! Instead of their usual harmony soul and doo wop work, this album's a swinging jazz vocal workout – with the group harmonizing more in a Four Freshmen mode than a streetcorner one. ... LP, Vinyl record album