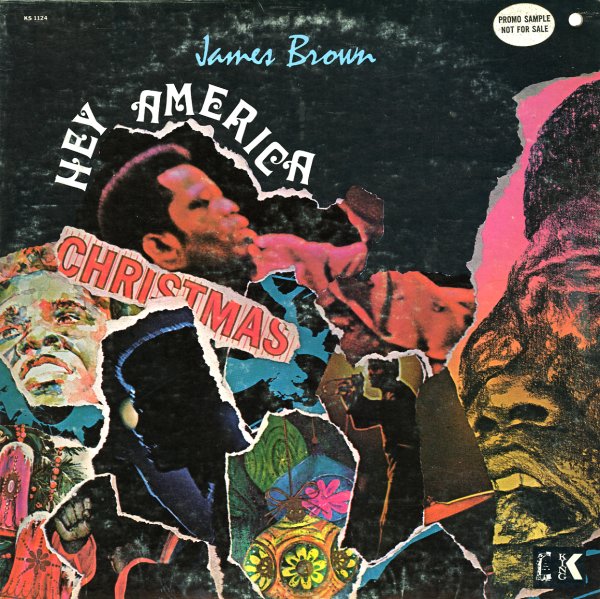 The last, and most obscure of James Brown's Christmas albums of the King years – and quite possibly the hippest too! Given that James is shouting "Hey America" in the title, he's clearly going for a righteous and semi-political tone on the set – singing Holiday tunes, but also slipping in a larger message from time to time. A few tracks seem familiar from other JB holiday sets, and titles include the funky "Hey America", the rollicking "Go Power At Christmas Time", and the cuts "Christmas Is Love", "Santa Claus Is Definitely Here To Stay", "My Rapp", "I'm Your Christmas Friend Don't Be Hungry", and "Merry Christmas Baby & A Very Happy New Year".  © 1996-2022, Dusty Groove, Inc.

Funky Christmas
King/Universal, Late 60s. New Copy
CD...$13.99 14.99 (CD...$5.99)
Excellent funky Christmas – essential for any soulful holiday celebration! Not everyone knows it, but James Brown cut a fair number of Christmas albums during the 60s – thre albums, and a bunch of singles to be exact! They're all super-rare, but this great collection brings together ... CD

Christmas Album (aka It's A Funky Christmas)
Charly (UK), Mid 90s. New Copy
CD...$5.99 18.99
Obscure Holiday work from James Brown – not the oft-compiled tracks from his late 60s years at King Records, but some later numbers that show that Brown could still turn out one heck of a Christmas tune! James' vocals are at their older best – still surprisingly powerful, and able to ... CD

Soulful Christmas (LP sleeve edition)
King/LMLR, 1968. New Copy
CD...$13.99 14.99 (LP...$119.99)
James Brown recorded a few different Christmas records back in the 60s – but this stunner may well be the best of the bunch – a killer record that not only fills the need for James Brown Holiday tunes, but which also more than lives up to his non-Christmas gems for King Records too! ... CD

Christmas With The Platters
Mercury/Universal (Japan), 1963. New Copy
CD...$13.99 16.99
It's a smooth smooth Christmas from The Platters – heard here in their wonderful 1963 Christmas album! The set follows in the style of the group's late 50s hits – but with a sound that's a bit more tuned to the season, and not as much in the late nite smoochy mode of some of their more ... CD

Old Fashioned Christmas
A&M/Universal (Japan), 1984. New Copy
CD...$13.99 16.99
A slightly bittersweet Christmas album from The Carpenters – given that the set was issued after the too-early death of the lovely Karen Carpenter, and stands as both a Holiday record and a farewell to the charms of this legendary pop duo! The music is a nicely evolved version of their ... CD