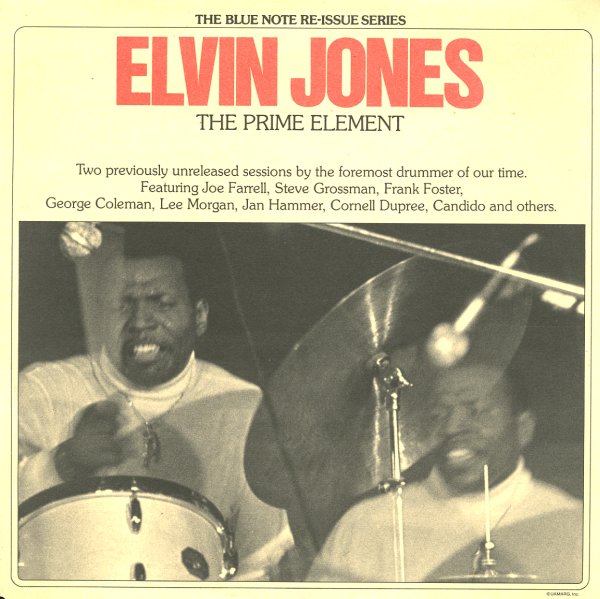 A unique 70s package from Blue Note – one that features two full albums recorded by the drummer for the label, both of which were unissued until this double-length set! The first half features some of the material that would later go on to make up the longer album At This Point In time – a unique large group session that was recorded in 1973, and which has jones really expanding his musical vision past familiar modes – leading a tremendous group with superb saxophone work from Pepper Adams on baritone, and both Frank Foster and Steve Grossman on soprano and tenors – plus a young Jan Hammer on keyboards and piano, Cornell Dupree on guitar, and the mighty Gene Perla on bass – really giving everything a great sort of kick! But there's also plenty of percussion too – as the lineup includes work from Candido on congas, Warren Smith on tympani, and both Omar Clay and Richie Pablo Landrum on added percussion – all of which really sounds amazing next to Elvin's already dynamic work on drums. Titles include "At This Point In Time", "Whims Of Bal", "Currents/Pollen", and "The Prime Element". The second half of the record is a really wonderful session from 1969 – one with a slightly different vibe than some of Jones' power trio records of the 70s, with superb contributions from Lee Morgan on trumpet, George Coleman on tenor, and frequent musical partner Joe Farrell on soprano, tenor, and flutes! Wilbur Little plays bass, Candido adds in some great congas, and there's some additional percussion on the album too – really adding a lot to titles that include "Raynay", "Once I Loved", "Inner Space", "Dido Afrique", and "Champagne Baby".  © 1996-2023, Dusty Groove, Inc.