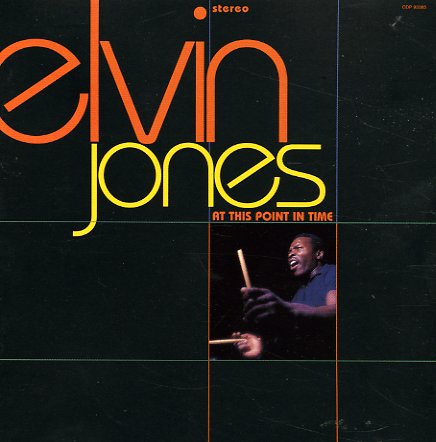 At This Point In Time

A real rarity from the Blue Note years of drummer Elvin Jones – a unique large group session that was recorded in 1973, but not issued by the label until many years later! As with many of the unreleased Blue Note sets, the quality is superb – Jones doing something a bit different, which is why the label maybe didn't release the album – and really expanding his musical vision past familiar modes – leading a tremendous group with superb saxophone work from Pepper Adams on baritone, and both Frank Foster and Steve Grossman on soprano and tenors – plus a young Jan Hammer on keyboards and piano, Cornell Dupree on guitar, and the mighty Gene Perla on bass – really giving everything a great sort of kick! But there's also plenty of percussion too – as the lineup includes work from Candido on congas, Warren Smith on tympani, and both Omar Clay and Richie Pablo Landrum on added percussion – all of which really sounds amazing next to Elvin's already dynamic work on drums. Titles include "The Prime Element", "Whims Of Bal", "Currents/Pollen", "Pauke Tanz", "The Unknighted Nations", "Don't Cry", and "At This Point In Time".  © 1996-2023, Dusty Groove, Inc.