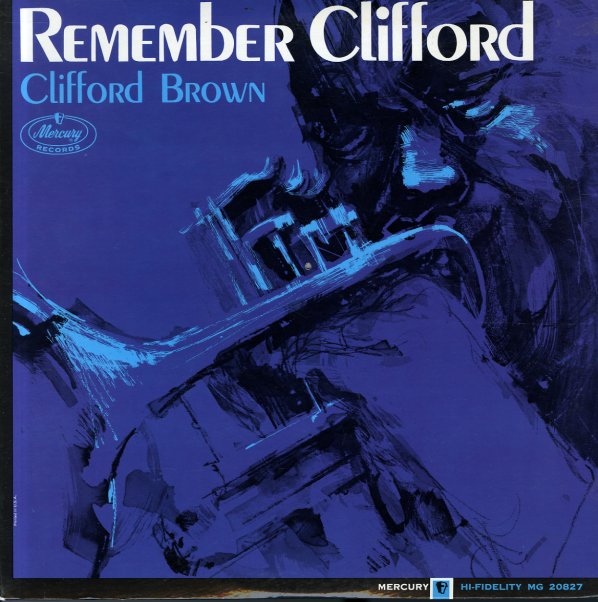 A lasting tribute to Brownie! The album was released some years after Brown died, and is comprised of songs from his 1955 album Clifford Brown With Strings, plus a few tracks from other recording sessions from that year before his death. The players include Richie Powell (Bud Powell's brother who also died in the crash with Brown),piano; Max Roach on drums and Harold Land and Sonny Rollins on tenor sax. Brown's original composition "Sandu" and Richie Powell's own "Time" are included as well as "Yesterdays," "Cherokee (Indian Love Song)," "Willow Weep for Me" and an unusual version of "Take the A Train."  © 1996-2022, Dusty Groove, Inc.
(Red label stereo pressing with repeating rim logos. Cover has light surface and edge wear, and very light staining on the back.)

Clifford Brown Memorial (Prestige)
Prestige, Early 50s. Very Good
LP...$99.99
Early 50s material recorded by the late Clifford Brown – issued here in a classic "memorial" package slightly after his death in 1956! And while Brown never recorded much for Prestige – and never really as a leader – these sides are still a great example of his ... LP, Vinyl record album

Clifford Brown In Paris
Prestige, 1953. Near Mint- 2LP Gatefold
LP...$14.99
Hard to get work by Clifford Brown – 1953 recordings originally done in Europe for the Vogue label! On the first record, Brown's working in front of a Parisian trio that features Henri Renaud, Pierre Michelot, and Benny Bennett. There's 11 tracks in all, including "I Can Dream, Can't I? ... LP, Vinyl record album

Clifford Brown All Stars
EmArcy, 1954. Near Mint-
LP...$13.99
A key slice of Clifford Brown from the 50s – two long tracks both recorded in an open-ended jam session format, showing a side of Brown's powers that's even bolder and more inventive than some of his previous studio work! The album soars along beautifully – with Brownie in the lead ... LP, Vinyl record album

Memorial Album (Blue Note)
Blue Note, 1953. Near Mint-
LP...$39.99 (CD...$4.99)
Clifford Brown only recorded a handful of sides for Blue Note – but all of the best ones are included in this excellent album – a full length set that culls together Brown's material from the 10" years, issued as a memorial to his early death in 1956! Side one features Brown with ... LP, Vinyl record album

Afternoon Of An Elf
Mercury, 1955. Near Mint-
LP...$14.99
Incredible solo work from Erroll Garner – material that really lets him open up with a fantastic and unbridled sense of rhythm – a bit like Art Tatum on his famous late-life solo work! Titles include "Afternoon Of An Elf", "Don't Be That Way", "Fandango", ... LP, Vinyl record album

Perceptions
Mercury, Late 70s. Very Good+
LP...$8.99
Charles Earland really soars to the heavens here – working in a style that's very different than his early jazz albums on Prestige, but which still features plenty of great solo moments too! Earland's key partner in crime here is the great Randy Muller – the man behind the sound of ... LP, Vinyl record album

Sil Austin Plays Pretty For The People
Mercury, Early 60s. Very Good+
LP...$4.99 6.99
No honking here, as Sil Austin takes his deeply soulful tenor sax, and turns it to a set of creamy late-nite tracks – all done over some very "pretty" backings, ala the Verve strings work of Ben Webster or Lester Young. Most cuts have voices in with the orchestrations – and ... LP, Vinyl record album