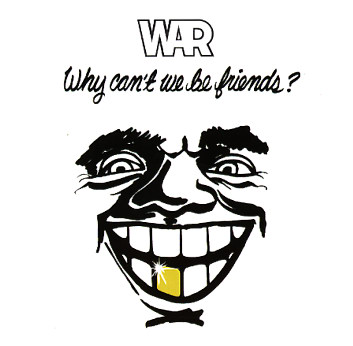 A huge moment for War – maybe the group's biggest album of the 70s, but a set that still has them holding onto everything that makes the great! Like Earth Wind & Fire at their best, War have this way of staying strong and righteous, while still able to hit a hook – jamming one minute, but finding sharp focus the next – and balancing it all out over the course of an album so that there's a sense of depth that really keeps on going once the familiar cuts draw you in. In this case, the familiar cuts are giants – the stunning Latin funk gem "Low Rider", which became an anthem for a generation, and the radio hit "Why Can't We Be Friends" – mixed with other nuggets like the jazzy "Don't No One Get You Down", the funky "Heartbeat", and the cuts "Lotus Blossom", "Smile Happy", "So", and "Leroy's Latin Lament".  © 1996-2022, Dusty Groove, Inc.

All Day Music
United Artists/Avenue, 1971. New Copy (reissue)
LP...$24.99 25.99 (LP...$9.99)
A sweet sweet set from the mighty War – and maybe the record that really has the group coming into their own! The record's got a stronger vocal presence than earlier War efforts, which is a really great thing – kind of a blend of sweet soul, heavy funk, and Chicano modes – all ... LP, Vinyl record album

Deliver The Word
United Artists/Avenue, 1973. New Copy (reissue)
LP...$24.99 25.99 (LP...$11.99)
War delivers the word, and a whole lot more as well – that amazing blend of styles that always made the group way more than just the sum of its parts! The classic groove is very firmly in place here – a great style that mixes jazz funk with a freer jamming style borrowed from Latin ... LP, Vinyl record album